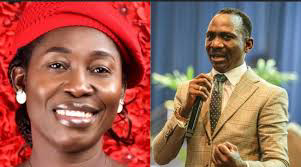 Senior Pastor of Dunamis International Gospel Centre Worldwide, Dr Paul Enenche made the revelation on Wednesday.According to Pastor Enenche, the late Osinachi responded very well to the oxygen therapy and that they felt excitement at that progress.

Enenche said that was the point Osinachi’s condition was before he went for a crusade in Cameroon.“It was in Cameroon, the second night [of the crusade] that I got to know of the unfortunate incident of her passing,” he said.Mrs Nwachukwu, 42, who is popular for her gospel hit song “Ekwueme” died last Friday night in an undisclosed hospital in Abuja.

Earlier reports claimed that she died of throat cancer; however, the social media had been agog with allegations of constant beatings and bullying by the late singer’s husband, Mr Peter Nwachukwu, which many claim resulted in her death.

Confirming the domestic abuse suffered by the late gospel singer, Enenche said he only got the wind of it when he questioned the twin sister, the first son and music producer of the deceased.

Narrating how the church tried to save the life of Osinachi, the Dunamis senior pastor said he call different doctors to attend to her.

“Over two and a half to three months ago, she came to see me with her husband with complaints of chest pain and respiratory distress.

“And when the symptoms did not abate, I counselled that they go to the hospital to help us to know exactly what we were dealing with.

“On seeing her, they ordered some investigations after examinations and that included CT scans and computerized axial tomography scans. That was done. From what the doctor saw, they felt that there was a need for further investigation, either at the University of Abuja Teaching Hospital or the National Hospital in Abuja.

“I called the doctor at the University of Abuja Teaching Hospital, Dr Akor Alexander, and told him the situation and he asked that they come to see him immediately. And they went to the Gwagwalada teaching hospital.

“After they had examined her there and saw the situation, they felt that there was a need for histology and biopsy of the lung tissue, and they asked that they should go to the National Hospital to get that done.

“I again called the doctor, Jubril, who is head of pathology and consultant histopathologist of the National Hospital, Abuja, and reported the issue to him to help us go ahead with the investigations and find out what exactly happened.

“I am calling names, I am calling places because the people are available and alive and they are verifiable.

“And then, they continued the management. The histology was done and from what I saw at that time, the picture was much milder than what the CT scan earlier showed. So, we felt very happy that at least there was a relief.

“She called me, literarily daily and we prayed with her. She reported progress. The point came when she needed no oxygen anymore. According to what she said to me one night, they checked her oxygen perfusion and it was 100% and we were very very excited at that progress,” Enenche narrated.

He went further to say that if there was domestic violence that lead to or coincided with the symptoms that she came with two and a half to three months ago, there is no way he would know.

Enenche said: “The things we were hearing after her passing, were things that were very very strange to my hearing. Then, I began to ask questions.

“First, I asked the twin sister, were you aware that your sister passed through all these things? She said yes she knew some of them. But that the majority of them, she was hearing also from those she confided in.

“I asked her if you knew, why didn’t you let us know. And the twin sister said she always begged her please don’t let the church know, don’t let the pastor know please, the man would change, just pray for us, the man will change. And that continued to happen.

“And the young man said, they could not tell me because the father would always ask them after they left me, what did you tell the pastor, did you tell him anything, and so on and so forth.

“Other members of the choir who were privy to what was going on, I asked several of them when we paid a visit to the house of the deceased yesterday. What happened? Why were we not aware of all these things? The same story, that she will always go on her knees and ask them please don’t, don’t, don’t, just pray, we are trusting God for him to change.

“The last one that touched me so much was the music producer, who came to see me in the office two days ago to tell me his own experience, how he witnessed that the man slapped the wife in his studio.

“And I said to him, you saw a man slapped a woman in your presence and you left the man alone and you are a man yourself. And he said before he could respond to the man, the woman again in tears on her knees begged him not to do anything, to leave him alone. And not even to do anything at all, and so on and so forth.

“So, we have had these stories and these are the things we got to know after she has passed”.

Meanwhile reports the Public Relations Officer, of the FCT Police Command had on Monday confirmed the arrest of the late singer’s husband.