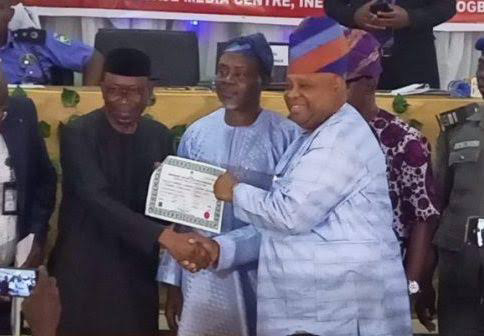 The Osun State Governor-elect, Senator Ademola Adeleke on Wednesday received his certificate of return from the Independent National Electoral Commission.

Adeleke was declared the winner of the Saturday, July 16 poll, garnering 403,371 votes to defeat Governor Gboyega Oyetola of the All Progressives Congress, who polled 375,027 votes.

The certificate presentation to Adeleke by the INEC National Commissioner, Supervising Osun, Ogun and Oyo states, Prof. Kunle Ajayi, was preceded by the presentation to the deputy governor-elect, Prince Kola Adewusi.

The presentation came about 24 hours after SaharaReporters reported that Nigerian singer, David Adeleke, popularly called Davido disclosed on social media that his uncle, Senator Adeleke had not received the certificate.

In his acceptance speech after receiving the certificate at a brief ceremony held at Osun INEC head office in Osogbo, Adeleke dedicated his victory at the poll to the memory of his late elder brother, Senator Isiaka Adeleke and the people of Osun State