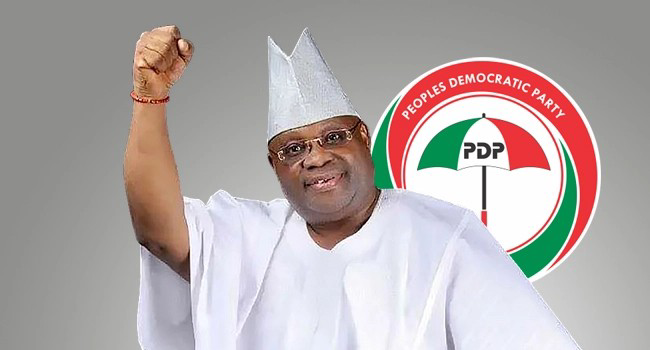 The Supreme Court has dismissed the suit challenging the authenticity of Ademola Adeleke’s candidacy in the just concluded Osun State Governorship Election in South-West Nigeria.

The suit was instituted by Dotun Babayemi, a former governorship aspirant of the Peoples Democratic Party in Osun.

In a judgement delivered by Justice Amina Augie, the five-member panel held that the court lacked jurisdiction to hear the suit after counsel for the appellant, Adebayo Adelodun, withdrew the earlier notice of appeal that was filed within time.

At the resumed hearing, Adelodun, who represented the appellant and  Babayemi informed the court that he sought to withdraw the earlier notice of appeal to replace it with the fresh application he filed.

But the panel held that Section 285(11) of the constitution stipulated that an appeal on a pre-election matter must be filed within 14 days from the day of the decision, and that having filed the second appeal out of time, the apex court lacked jurisdiction to entertain the matter.

Justice Augie, therefore, dismissed the appeal for lack of jurisdiction.

Babayemi had asked the court to invalidate the primary election that produced the governor-elect, citing non-compliance with a court order.

In his judgment on the matter, on May 18, Justice Nathaniel Ayo-Emmanuel of a Federal High Court, Osogbo, had upheld the governorship primary that produced Adeleke.

Also, the Court of Appeal, Akure Division, in its judgment of July 20 on the appeal filed against the decision of the Federal High Court, Osogbo, aligned with the lower court and dismissed Babayemi’s appeal.

After his victory at the party’s primary, Adeleke trounced Governor Gboyega Oyetola of All Progressives Congress at the governorship election in the state.

The Independent National Electoral Commission in July said Adeleke won 17 of the 30 local government areas during the election whilst Oyetola who sought re-election won 13 local governments.