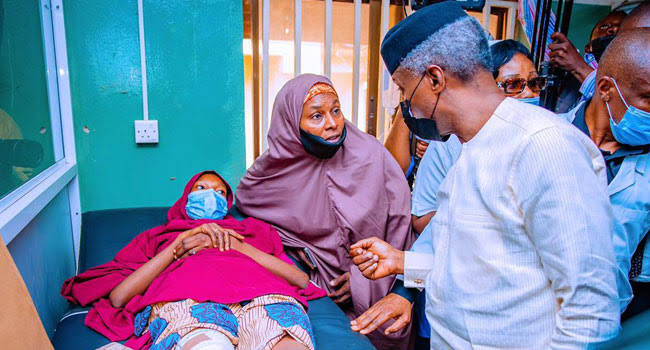 Vice President Yemi Osinbajo on Tuesday canceled his planned trip to Lagos State for the Tinubu colloquium and travelled to Kaduna State.

The Vice President is on a condolence visit to the Kaduna state following bandits’ attack on an Abuja-Kaduna-bound train conveying hundreds of travellers. Many of the travelers were killed in the attack and others were abducted.

Spokesperson to the Vice-President, Laolu Akande, said Osinbajo was on his way to Lagos for the 13th Tinubu Colloquium before making a detour to Kaduna.

“On his way to Lagos for the 13th Tinubu Colloquium marking former Lagos State Gov’s 70th birthday, VP had to detour to Kaduna this afternoon on receiving news of the extent of human and material losses occasioned by yesterday’s dastardly attack on the Abuja-Kaduna railway route,” Akande said.

The Vice-President was received at Kaduna Airport by the State Governor, Nasir El-Rufai.

He also visited victims of the attack at 44 Nigerian Army Reference hospital and Saint Gerald’s Catholic hospital both in the Kaduna state capital.

Osinbajo in a video shared on his Twitter handle called on Nigerians should not to allow the terrorists to break their spirits and their resolve.

“We will prevail and our land will be secure,” Osinbajo said.

Following the bandit attack, security agents have been deployed to the scene while the Nigerian Railway Corporation (NRC) has suspended train operations along the Abuja-Kaduna route till further notice.

Meanwhile, the Chief of Defence Staff, Gen Lucky Irabor as well as the Inspector General of Police, Usman Alkali were earlier at the scene of the attack.