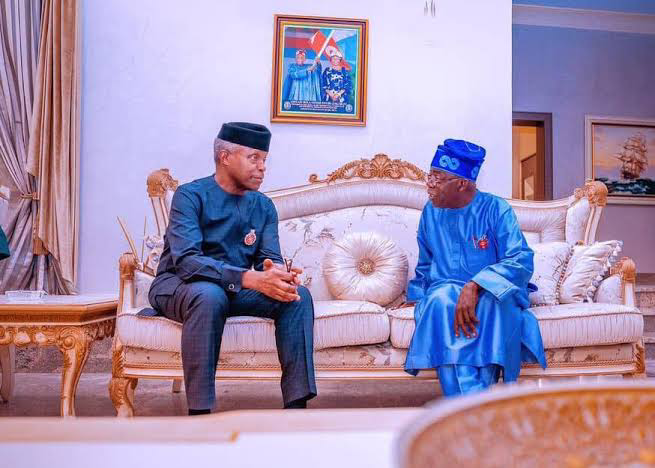 Vice President Yemi Osinbajo, on Wednesday night, paid a visit to presidential candidate of the All Progressives Congress (APC), Bola Ahmed Tinubu, at the latter’s residence in Abuja where the duo met behind closed-doors.

This was the first time Osinbajo would be visiting Tinubu after the presidential primary election that produced the former Lagos State governor as the APC presidential standard bearer for the 2023 general election.

Immediately after the primary election, Tinubu had paid Osinbajo a surprise visit at his Aguda House in the presidential villa, dispelling specualtion that the duo may have fallen out in the aftermath of the contest for the APC presidential ticket.

The rumour of a seeming bad blood between Osinbajo and Tinubu played out again when the vice president’s name was conspicuously missing from the Tinubu/Shettima Presidential Campaign Council.

But the Presidency had clarified that it was President Muhammadu Buhari who demanded that Osinbajo and secretary to government of the federation (SGF), Boss Mustapha, be excused from campaign activities so that they can focus on governance

Details of the Wednesday’s meeting between both men were still sketchy as of the time of filing this report, as Osinbajo who came out of the meeting with Tinubu refused to speak to journalists.