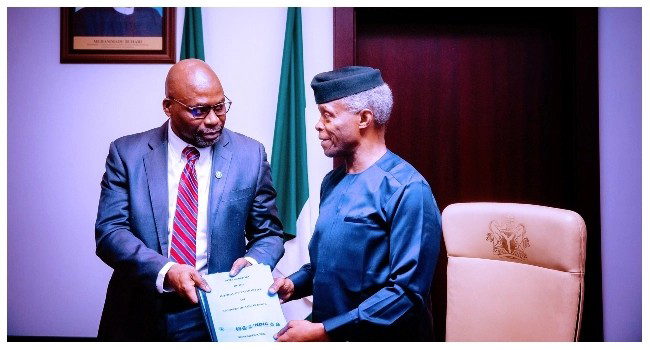 Vice President Yemi Osinbajo on Wednesday received an Interim Report from an inter-agency committee set up on the recovery of debts owed to the Asset Management Corporation of Nigeria (AMCON).

Members of the Committee led by its Chairman, Bolaji Owasonoye, who is also the Chairman of the Independent Corrupt Practices Commission (ICPC) submitted the report to the VP at the Presidential Villa in Abuja.

Osinbajo said the government would review the report and act accordingly, observing that the issue of AMCON debtors doing further business with government agencies is a due diligence matter and there would have to be compliance with the requirements of the law.

Specifically, the Committee proposed an advisory to the Federal Government that going forward, “all AMCON debtors must not be allowed to transact business or enjoy patronage with any government agency whatsoever, except clearance is obtained from AMCON on the debt status of such obligors,” according to Owasonoye.

“Between 2020 and 2021, AMCON made significant recoveries which is highlighted in the report. Within the period under review, AMCON witnessed 10% growth in the recovery performance across various asset classes.

“For instance, in the year, 2020, the sum of N146 Billion was recovered, while in 2021 the sum of N161 Billion was also recovered. The recovery outlook for 2022 is also looking positive and the Committee will not relent in its effort in engendering more recoveries,” he stated.

He added that the committee will continue its assignment with the institution of bankruptcy proceedings, tax infraction, inquiry as well as other strategies to ensure the obligors are brought under the recovery net of AMCON.

The mandate of the committee, which was inaugurated in September 2019,  includes the review of status of debt owed to AMCON, collate information relating to respective debtors and their current status, deliberate on practical, legal and other strategies for the recovery of the outstanding debt, among others.

The meeting was attended by the Managing Director and Chief Executive Officer of AMCON, Ahmed Kuru, as well as representatives of agencies including the ICPC, Federal Ministry of Justice; Nigerian Financial Intelligence Agency; Nigerian Deposit Insurance Corporation; Central Bank of Nigeria; Department of State Services; and the Economic and Financial Crimes Commission.