Osinbajo meets APC stakeholders in Taraba ahead of presidential primaries 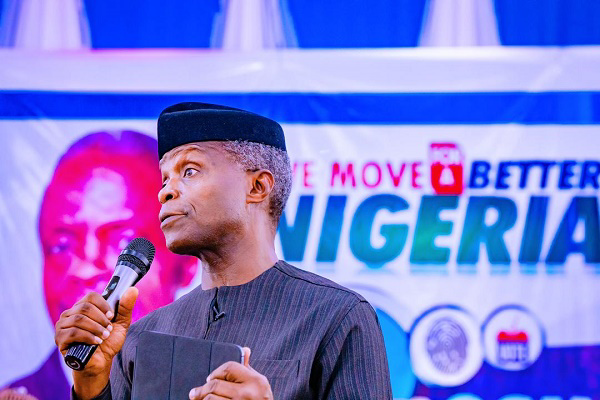 Vice-President Yemi Osinbajo met with APC stakeholders in Taraba on Wednesday ahead of the presidential primaries.He says a better Nigeria is in sight with the collective efforts of Nigerians.

Osinbajo disclosed this on Wednesday in an interview with journalists, shortly after he held a closed door meeting with delegates of the party in Taraba State, ahead of the party primaries.

The aspirant, who was visibly overwhelmed with joy due to the warm reception accorded him and his team in the state, noted that he was offering himself for a better future for the country.

“You can see the cheerful faces as they welcome me, I am sure it will continue in unity as we go on to try to find solutions to the country’s challenges,” he said.

Mr Aaron Artimas, the party’s Publicity secretary in the state, told journalists after the meeting, that Osinbajo sought delegates’ support to emerge as the party’s presidential flag bearer.

Artimas said Osinbajo was qualified to “change the country’s situation for good, going by his profile and doggedness for governance”.

“The VP’s visit today is to seek our party delegates’ support to emerge as the presidential flag bearer in the 2023 General Elections.

“His profile and doggedness for governance has convinced us that he is qualified and can transform Nigeria,” he said.

On April 11, Osinbajo declared his intention to contest the 2023 presidency on the platform of the All Progressives Congress (APC).

Osinbajo has been going around the country seeking support from party stakeholders and delegates.