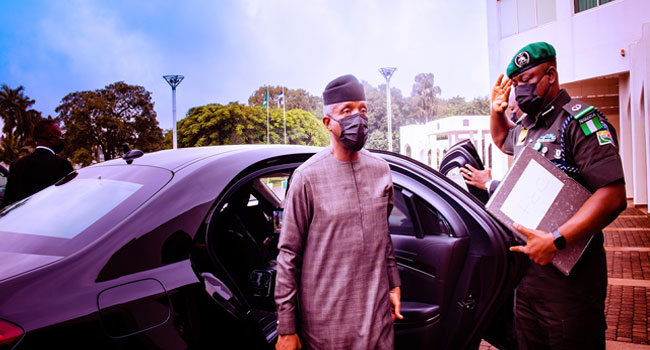 Prof. Osinbajo stated this in his remarks delivered at the global virtual launch of Nigeria’s Energy Transition Plan, a roadmap to tackle the dual crises of energy poverty and climate change.

Speaking on the need to have a peculiar transition plan, the Vice President said “for Africa, the problem of energy poverty is as important as our climate ambitions. Energy use is crucial for almost every conceivable aspect of development. Wealth, health, nutrition, water, infrastructure, education, and life expectancy are significantly related to the consumption of energy per capita.”

The VP highlighted the significant scale of resources required to attain both development and climate ambitions. Nigeria would need to spend $410 billion above business-as-usual spending to deliver our Transition Plan by 2060, which translates to about $10 billion per year.

“The average $3billion per year investments in renewable energy recorded for the whole of Africa between 2000 and 2020 will certainly not suffice,” he added.

Additionally, the Vice President noted that “we have an inter-ministerial Energy Transition Implementation Working Group, which I chair. We are currently engaging with partners to secure an initial $10 billion support package ahead of COP27 along the lines of the South African Just Energy Transition Partnership announced at COP26 in Glasgow.”

At the virtual event, Mr. Shubham Chaudhuri, Nigeria Country Director for World Bank said the bank plans “to commit over USD 1.5 billion towards the Energy Transition Plan on renewable energy, on power sector reforms, on clean cooking, and wherever opportunities arise.”

In a similar vein, Mr. Adam Cortese, CEO, Sun Africa stated that “the launch of Nigeria’s Energy Transition Plan has further accelerated our efforts, proving Nigeria to be fertile grounds for investments in the sector. We are in the final stages of discussion with US EXIM Bank on a USD 1.5 billion financing package.”

Speaking on the effects of Climate Change in Africa, Prof Osinbajo explained that “climate change threatens crop productivity in regions that are already food insecure, and since agriculture provides the largest number of jobs, reduced crop productivity will worsen unemployment.

“It is certainly time for decisive action, and we just cannot afford to delay. African nations are rising to the challenge. All African countries have signed the Paris Agreement and some countries, South Africa, Sudan, Angola, and Nigeria have also announced net-zero targets.”

Giving more details on energy poverty in Africa, the VP noted that “the current lack of power hurts livelihoods and destroys the dreams of hundreds of millions of young people.