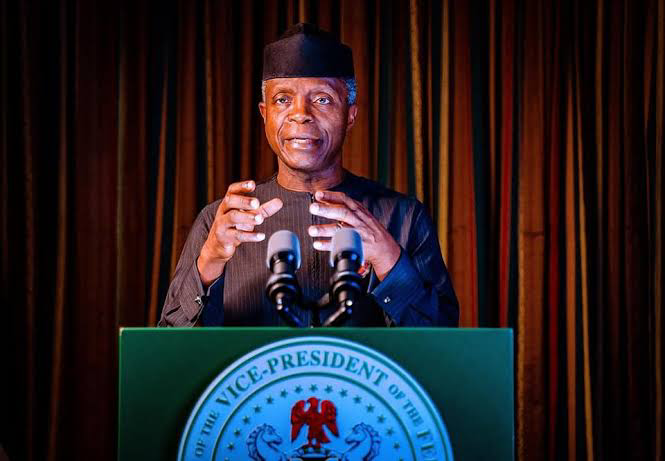 Osinbajo claimed that the northeastern state remains one of the luckiest states in the country due to the leadership it has had in the past 11 years.

Osinbajo said this on Monday night in Abuja, at the fifth anniversary celebration of the North East Children’s Trust Learning Centre; a charity educational centre he envisioned in 2016 and which took off a year later in Maiduguri, for children orphaned by the insurgency in the North-East.

Senior Special Assistant to the Vice President on Media and Publicity, Laolu Akande, disclosed this in a statement he signed on Tuesday titled ‘True leadership is about service to people, Osinbajo says as north-east children’s trust marks fifth anniversary.’

According to him, “I believe Borno State is possibly one of the luckiest states in this country, just going by the leadership that the State has had. Immediately after Governor Shettima, comes Governor Zulum.

“No state can ask for better than Governor Zulum, who had taken over from his dynamic predecessor, Gov Shettima.”

He commended the immediate past and current Borno State Governors: Kashim Shettima and Babagana Zulum for their roles in the development of the Center noting that “if you are not able to serve the people with everything that you have and with all your heart, then it would be irrelevant and perhaps even unjustified.

“So, I want to really commend Governor Zulum and his predecessor Governor Shettima for the great work they have done.”

“I said to them, that what we want from you (teachers) is a generous spirit; we want you to love and care for these children. And the teachers have been incredible; they have done such a great job with everything you see today.

“These ladies and gentlemen are the real heroes of the story of the learning centre. And in the past five years, they have contributed in every way by just being there night and day, ensuring that they love and care for the children.”

Also speaking at the ceremony, the Borno State Governor, Babagana Zulum and the Sultan of Sokoto, Sa’ad Abubakar praised the Vice President for spearheading the initiative, as well as his dedication and commitment to the education and welfare of the children in the school since it was established.

The NECT learning centre, which boasts of some of the best facilities in terms of education, vocational education and digital literacy, now has 173 of its children in secondary school.