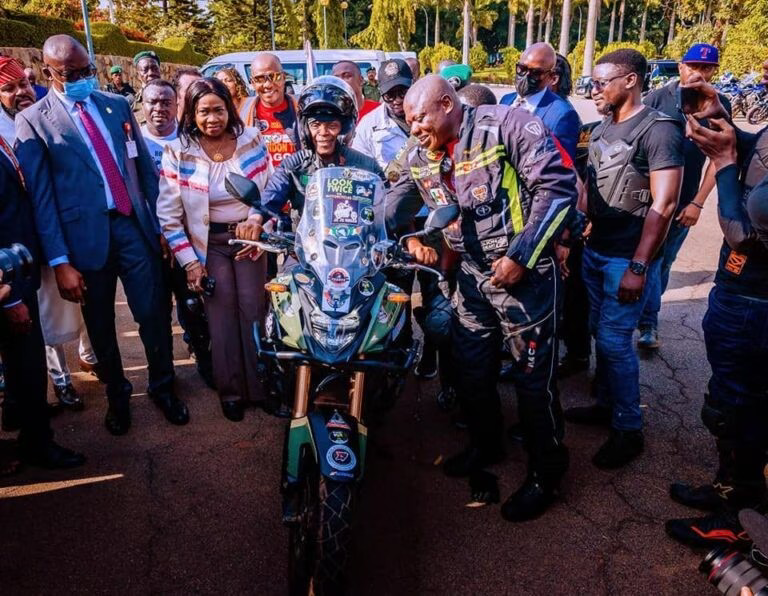 Osinbajo, who received Adeyanju at the Presidential Villa, said there is a need to sustain the campaign against polio, warning that the disease is “very crafty.”

The vice president said he was pleased to receive Adeyanju on behalf of President Muhammadu Buhari, adding that a trip of 12,000 kilometers of uncertain terrain and 12 countries was no mean feat.

“ I am really also excited about the fact not only that you have done this for the adventure because I am told you are an adventurer; that you do sky diving, bungee jumping, cycling, all sorts of other adventures but more for a very worthy cause which is the Polio crusade.

“And I must say to you that the whole polio campaign is one that we have taken quite seriously; the Federal Government of Nigeria, especially in the past couple of years, has taken it very seriously indeed which explains why now we have an end.

“But I am sure the District Governor will let you know; polio is a very crafty disease and I think you have also pointed that out when you think you have conquered it, if you are not careful, if you are complacent, it will come back, very quickly; which is why we must keep a sustained attack against it.’’

Osinbajo said the National Economic Council (NEC) had also made polio one of the central public health issues.

According to him, NEC has a committee that deals with polio alone while the council also receives reports on polio from relevant agencies.

“The World Health Organisation and several other Organisations, including local organizations, will come and give us a report of the status of the drive against polio in the country and so, it keeps us well-informed.

“I think that this is something that we must continue to support as well as other very significant public health issues,’’ he said.

The vice president said that Adeyanju’s voyage resonated with the African/Nigerian story of resilience, hard work, and intelligence.

On his part, Adeyanju said that the essence of adventure was to communicate the polio message.

He said that though Africa had been certified polio-free, the disease was rising again and continued to pose a threat.

“Yes, Africa, we know that we are certified polio-free because we have not recorded in Nigeria; Nigeria being the last country, just as the DG said earlier.

“But because we have been certified polio-free, we have become complacent.

“ And when people become complacent, we lose focus, quality drops and when quality drops, a surprise is just around the corner.

“ That is why we are beginning to see incidences of polio in Malawi and Cote d’Ivoire on June 16 and June 19, declared two-day national immunization days because they discovered polio.’’

He said that Togo had also discovered polio and had started its national polio immunization.

Adeyanju said that the polio resurgence was because everybody got relaxed and appealed to the vice president to sustain the support for polio funding.

“But the danger is still there; it is still a clear and present danger; we need to do something; so, using this medium, Sir, as the number two Nigerian, a lover of humanity, someone we love so much, we respect so much, to continue to support polio funding.

“Rotary needs it; the Ministry of Health needs it; we need to end the disease; we need to continue the immunization so that we can actually put an end to polio.

“If we continue to do nothing, the virus will come back and if it comes back, all the good work we have done in the last 30 years will go down the drain.

“So, Sir, on behalf of the Rotary Foundation, Rotary needs your support towards ending polio in Africa,’’ he said.

Adeyanju, who recounted his experience traversing wild areas and game reserves filled with Lions and hyenas, said the trip helped him discover the true African story of warmth and hospitality.

The biker had earlier presented an “End Polio Now“ flag to the vice president.

Osinbajo had, also earlier, dressed as a biker; mounted and revved up a bike, and took photo shots amid bikers’ parade.

Abike Dabiri-Orewa, Executive Chairman of the Nigerians in Diaspora Commission, alongside government officials and members of the Rotary Club attended the event.