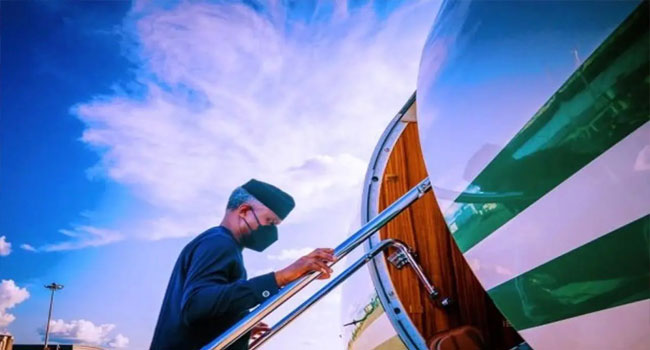 Vice President Yemi Osinbajo has travelled to Ghana for the 61st Ordinary Session of the Authority of the  ECOWAS Heads of State and Government, which is scheduled to hold on Sunday.

Professor Osinbajo left Nigeria on Saturday for Accra where he will be standing in for President Muhammadu Buhari at the summit.

His spokesman, Mr Laolu Akande, said in a statement that the VP will join other leaders to deliberate and take decisions on political, security, and humanitarian issues among others regarding the sub-region.

The regional bloc will also review the situations in Mali, Guinea, and Burkina Faso, particularly towards restoring democratic rule.

“At the summit tomorrow, the Mediation and Security Council of ECOWAS will update leaders on political developments in the region and in the Sahel region,” the statement added.

The Council will also provide updates on the issues of insecurity, challenges relating to youth unemployment, and the impact of diseases and pandemics on social tensions in the region.

On the sidelines of the summit, Professor Osinbajo will also attend a meeting of the five West African countries involved with “The Abidjan – Lagos Corridor Highway Development Project”, a flagship project of the Programme for Infrastructure Development in Africa (PIDA).

The Vice President will be accompanied on the trip by the Minister of State for Foreign Affairs Ambassador Zubairu Dada and some other members of the Federal Executive Council.

He is expected back in Abuja later on Sunday.