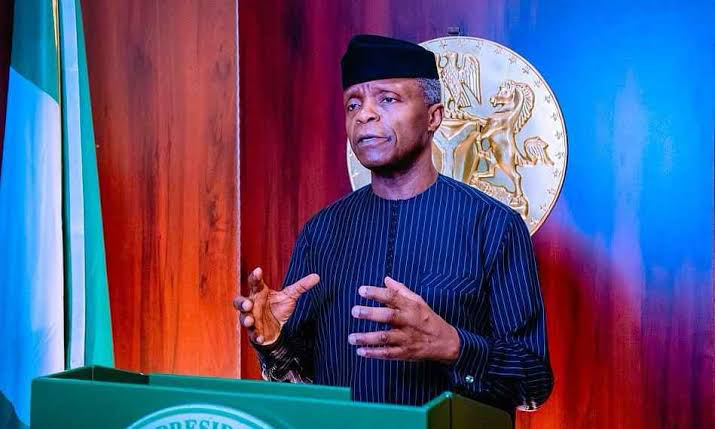 Osinbajo made the call in his keynote address at the 4th African Deep Seabed Resources (ADSR) Workshop on Wednesday in Abuja.

The workshop was organised by the International Seabed Authority (ISA) in collaboration with the Federal Government, African Union (AU) and the Norwegian Agency for Development Cooperation (NORAD).

Osinbajo said that the UN Convention on the Law of the Sea (UNCLOS) provided for all nations to explore and exploit mineral resources on the seabed beyond national jurisdiction for benefit of mankind.

“Notably, various nations have drawn benefits from exploration and exploitation of minerals in the area.

“Countries such as Germany, India, Korea, China, Japan, UK, Jamaica and many others have signed various contracts for the explorations of minerals with ISA.

“Unfortunately, no African country has either as a state or through its private contractors made any move in this direction. This is what gave impetus to the idea of the African Deep Seabed Resources Workshop.

“This is to also enlighten African countries on mineral exploitation opportunities which abound not only on their continental shelves but beyond these boundaries.

“In this regard, there is a need for Nigeria and indeed African industrial stakeholders, private organisations, entities and NGOs to synergies efforts towards strengthening the engagement of African states in activities in the international seabed area.

According to him, the workshop will engender thought-provoking discussions and provide implementable decisions based on guidelines and also wake the consciousness of African states for sustainable development of African Blue Economy through exploration of our abandoned deep-seabed minerals”.

The News Agency of Nigeria (NAN) reports that Osinbajo was represented at the event by the Minister of State for Transportation, Mr Ademola Adewole Adegoroye.

Lodge explained that the initiative of ISA was implemented in partnership with AU and NORAD.

He said the objective of the project was to better inform the decision-making process of African states in relation to deep-sea exploration, strengthen technical capacity and stimulate reflection and discussions.

“The situation today is that Africa remains the only regional group that has not yet taken full advantage of the provisions of UNCLOS to take part in deep-sea mineral exploration. This need to change.

“This is the reason why after taking office in 2017, I have made it a priority for ISA to seek to establish strategic partnerships with relevant international regional organisations like AU and others to better identify and respond to specific needs of African States.

“I sincerely hope that the discussions in the next couple of days would lay the foundation of the strategies for the African States to make the best possible use of the opportunities available to them for their benefits,” Lodge said.

Similarly, the Nigerian Permanent Representative at ISA, who doubles as Nigerian High Commissioner to Jamaica, Dr Maureen Tamuno, expressed appreciation to ISA for giving Nigeria the opportunity to serve as the Vice President of Council at the 26th Council of ISA.

“Our gathering here is to explore how the African continent can fully benefit from this sustainable development of African blue economies through the development of deep-sea minerals.

“Without a doubt, the potential benefit desirable from the sustainable development of these sea resources could be a major driver for the development of African economies and growth, particularly Nigeria.

“The deep seabed mining is relatively a new terrain. This workshop will create awareness about the importance and opportunities associated with the development of African continental shelves,” Tamuno said.

Speaking, the Deputy Head of Mission in the Royal Norwegian Embassy in Nigeria, Ms Anita Krogan, said the increase in population had also led to an increase in the need for mineral resources.

“In an international context, ISA has a vital role to play. The ISA has the capacity to assist developing states, as well as the transfer of technology in seabed activities.

“One of the purposes of the ADSR’s project is to create awareness of the potential benefits for African states in mining activities,” Krogan said.

NAN reports that the worship attracted officials from the National Boundary Commission, Ministry of Transportation, Nigerian Navy, the Nigerian Maritime Administration and Safety Agency (NIMASA) and many others