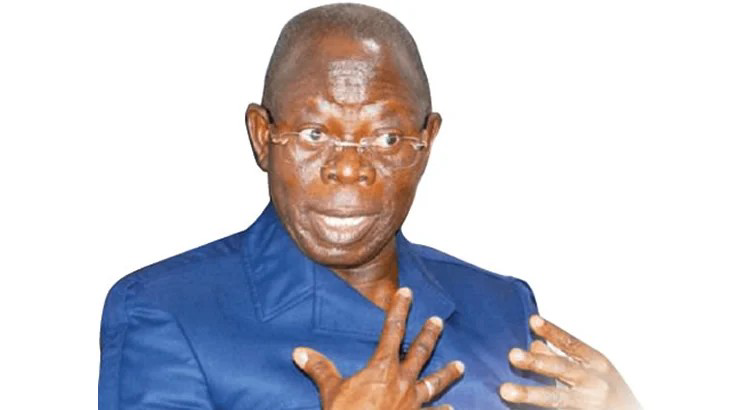 A former National Chairman of the All Progressive Congress, Comrade Adams Oshiomhole, has declared his intention to run for the Edo North Senatorial seat under the platform of his party.

Oshiomhole, who was also a two-time governor of the state, made the declaration at his 70th birthday party at Iyamoh in Edo State on Monday.

Oshiomhole said he chose to celebrate his birthday with his people because he was conscious of his origin as a nobody, given birth to under a tree by his mother but destined by God to be what he is today.

He said “It is true that for quite sometimes, many of our people have asked me why don’t you contest for the Senate and I said first APC has crisis, let us fix the crisis, let there be convention because you cannot begin to discuss what kind of baby you are going to have when you are not married.

“I said until APC is fixed you cannot talk of contesting election using the platform, have been chairman of the party, I know the danger we face if we are not able to fix the party and this was completed and consummated on the 25th of March and we have now elected a brand new National Working Committee and a brand new National Executive Council under the able leadership of a former governor, a former minister and a current senator, Adamu Abdullahi.

“We have done what needs to be done and I am inspired by the position of the new leadership for us to do what we need to do to retain power in 2023. I am therefore convinced that this is the time to proceed to the next step of the conversation which is about who lead the great people of Edo North in the senate by 2023.

“After all consultations, you must be convinced that you can do it and improve on it. These times that people have been asking me, I have also been examining myself because I do not want to go to the senate and sit down, listen to motions and collect salary at the end of the month.

“I do not believe that I need to go to the senate to take a sabbatical to take a rest because that is an important institution where men and women are elected by their people to contribute to affairs that affect their people, how funds are allocated and to ensure that the people of Nigeria have value for their resources and money.

“We lay more emphasis on the rotation of people, I am more concerned about even development, I have made it clear before as president of the NLC that democracy means that the leaders must listen to the people and if he deviates from that, the people have the right to interrogate the leader, if I did that as ordinary Nigerian I believe that as a senator, your interest cannot be ignored in the red chamber in Abuja.

“By my antecedent, I am a believer that this country has come to stay and our business is not to lament the imperfections but dedicate ourselves to the challenge of fixing the nation so that we can create a nation where every citizen will have a basis to be proud that he is a Nigerian. With your mandate, if I get to the senate I will do that”.

He said the idea of empowerment should be redefined from the tokenism that is given to constituents to ensuring that the infrastructure needed is built for the people to express themselves “because our people are not lazy.

“Our leaders from the six local government areas have gathered here today to say I should contest and I believe that with your support, we will get there.

PREVIOUS POST Two million people to start receiving N10,000 each monthly from June – FG
NEXT POST 2022 Grammy Awards: Kanye West matches Jay-Z as the rapper with the most Awards in history