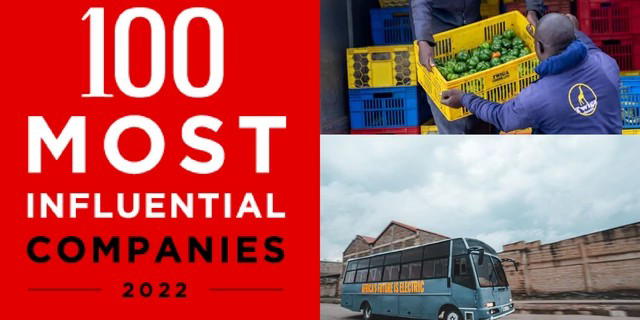 According to the magazine’s website, two African companies, Twiga foods and Opibus, have been named in this year’s list of TIME 100 Most Influential Companies. This year’s list edition is the second edition highlighting businesses making an extraordinary impact around the world.

Founded in 2017, Opibus is a Swedish-Kenyan technology company that designs, develops and deploys electric vehicles for the African continent, leading the transition to sustainable transport. It is the first company to deliver locally produced electric motorcycles and vehicles, and with nearly 100 employees, Opibus has one of the largest fleets of electric motorcycles deployed.

In January, Business Insider Africa reported the news of the Kenyan EV manufacturer launching the first all-electric bus designed and developed in Africa. The bus was coupled in-house with local engineering talent while at the same time utilising local manufacturing partners.

Twiga Foods, launched in 2014, has raised a total of $55 million in debt and equity, backed by investors including Goldman Sachs and the International Finance Corporation. The B2B food distribution company made it to the TIME 100 list for simplifying the supply chain between fresh food producers, FMCG manufacturers and retailers through a B2B e-commerce platform.

Several companies are in the financial industry, including Nubank, Klarna, Capital One and more.

The entertainment industry is also represented on the list by a range of businesses, including AMC Entertainment Holdings, Spotify, TikTok, HYBE, Netflix, Disney, Sony and more