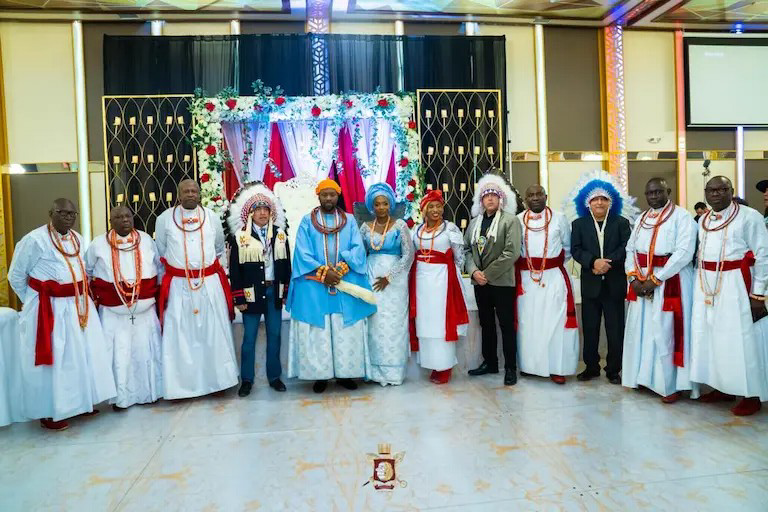 Attracting foreign investment is not just the task of government alone. Highly placed individuals and institutions with right connections also do so in the interest of their people. It is against this backdrop that the Olu of Warri Kingdom, His Majesty, Ogiame Atuwatse III, took the bull by the horns, leaving his cozy palace to go hunt for foreign investments in the interest of his subjects in particular as well as Nigeria’s interest in general.

His Majesty, therefore, has entered into a bilateral investment understanding with Tsuut’ina Nation Calgary Canada in the areas of Renewable Energy, Agriculture, trade and cultural exchange.

This memorandum of understanding was reached Thursday on the second day visit of the Monarch to Canada during a round table discussion with business leaders and investors where they expressed commitment to explore to partner for mutual interest.

The Monarch, who was accompanied on the investment drive trip with his wife, Olori Atuwatse lll, High Palace chiefs and other delegations also highlighted the rich potential of Warri Kingdom and harped on the need by all stakeholders to close ranks to address environmental degradation and the impact of climate change.

The Monarch also embarked on a guided tour of T’suut’ ina nation in company of Andrew JR Onespot Xakiji Sidodi said they both share cultural similarities with Itsekiri nation.

An elated Ogiame, who gladly accepted the partnership says it’s historic between T’suut’ina Nation and Warri kingdom because it has never happened in any nation among Africa continent.

This development was contained in a statement released by Media Public Relation, Ifetayo Adeniyi Moses said “After the tour of T’suut’ina Nation, in conclusion, Representatives of chiefs Andrew JR Onespot Xakiji Sidodi called on Executive Program Coordinator OZ consult, Ms Abi Goodman where the decision of the partnership was communicated to her.

“T’suut’ina Nation has agreed to partner Warri kingdom to First Nation of Canada so that the kingdom will benefit from trade , investment, exchange of cultural activities and educational assistance to the good people of Warri Kingdom.

“The decision was well applauded by Ogiame and the delegation. It was also made known that a later date will be communicated to perfect agreement.”

The Monarch was received in Tsuut’ ina Nation amid pomp and ceremony.

In bid to foster and promote tribe to tribe cultural heritage, the Tsuut ‘ina Nation in Canada Wednesday at a colourful ceremony welcomed the revered Olu of Warri Kingdom to Canada.

The Tsuut’ ina Dancers, drummers and Chiefs in their full regalia also joined at reception ceremony organised for the historic visit of his Majesty Ogiame Atuwatse III and Her Highness Olori Atuwatse III with members of His Chiefs and entourage at Calgary airport, Canada.

A lot of foreigners at the airport savoured the moment as they also could not wait to catch a glimpse of the Royal institution with lots of cultural displays at the airport.

Also, the Itsekiri community in Calgary Canada had lined up at Grey Eagle Resort and Casino in Calgary, beautifully dressed in Itsekiri attire poured royal accolades as Olu commenced his official visit to Canada attract direct foreign investment to Warri Kingdom and exchange of cultural heritage with Tsuut’ ina Nation in Calgary.

Simba Creative film crew were on ground to document the welcome ceremony and cultural display which would be part of the documentary that would be broadcast on National and international television stations.

The Tsuutʼina Nation is a First Nation band government in Alberta, Canada. Their territory today is confined to the Tsuut’ina 145 reserve, whose east side is adjacent to the southwest city limits of Calgary.

Their traditional territory spans a much larger area in southern Alberta while the Kingdom Of Warri or Iwere Kingdom, established in 1480, was part of the Nigerian traditional states based in the city of Warri in Delta State, Nigeria.

The current Olu of Warri is Ogiame Atuwatse III, who was crowned on 21 August 2021 among his agenda for his subjects is to attract direct foreign investment to Warri Kingdom hence his official visit to Calgary and Brampton in Canada.

All these events were made possible by the Executive Program Coordinator, OZ Consulting firm, Ms Abi Goodman, who has worked with various stakeholders in Canada to make sure everything goes as planned.

According to a statement released by the Media PR, Ifetayo Adeniyi Moses also stated that “Today indeed remains indelible for these great communities and various stakeholders as Olu of Warri is set to meet the Business community in the heart of Calgary.”

Trip not a fanfare despite cultural exhibitions

Apart from the purpose of the visit being to build bridges between his Kingdom and First Nations, court economic investment in his oil rich region, it was also to share rich cultural values.

The visit by Ogiame Atuwatse III, a king of Warri, an oil-rich region in the Niger Delta area of Nigeria that is home to the Itsekiri people, is said is part of a two-stop Canadian trip that also includes Toronto.

Motola Dawodu, the artistic director for Afrikadey! an arts and culture society in Calgary that facilitated the Calgary leg of the trip, said: “It’s a chance to have a cultural exchange and learn from one another, and I think that it will shed a new light on what Nigeria has to offer for Canadians and help bridge gaps for both of our cultures.”

While the king and many members of Calgary’s Itsekiri and larger Nigerian community arrived in traditional regalia, organisers say the trip is about much more than fanfare.

The visit is a strategic one for the Olu of Warri, as he looks for economic investment in Warri’s energy sector. He will be part of a round table with Calgary Economic Development and meet with local politicians.

Prince Onuwaje, president of the Calgary Itsekiri Association, said: “Progressive and educated” king is making moves to better the lives of his people while sharing their culture.

“Coming here to visit and build a relationship with the economic council of Calgary, as well as the Tsuut’ina Nation, trying to woo investment to Itsekiri land and also to showcase the Itsekiri culture, it is a thing of joy.”

During his trip, Ogiame Atuwatse III will tour Tsuut’ina Nation’s community and meet with Southern Alberta First Nations chiefs. Drummers, dancers, and delegates from the Tsuut’ina nation were on hand at the airport to welcome the king at the airport.

Ellery Starlight, Tsuut’ina councillor, says forming relationships like this is what they have done for centuries.

“We always try to improve our relations everywhere … whatever we form improves our state, our economy, the way people view us.”

Starlight believes tribe-to-tribe relations like this, outside of nation-states, can show what First Nations have to offer.

“It’s very important that the world knows that Canada is not the only one with strength. We have a lot to offer, we have a lot to give: a rich culture, a strong land base.”