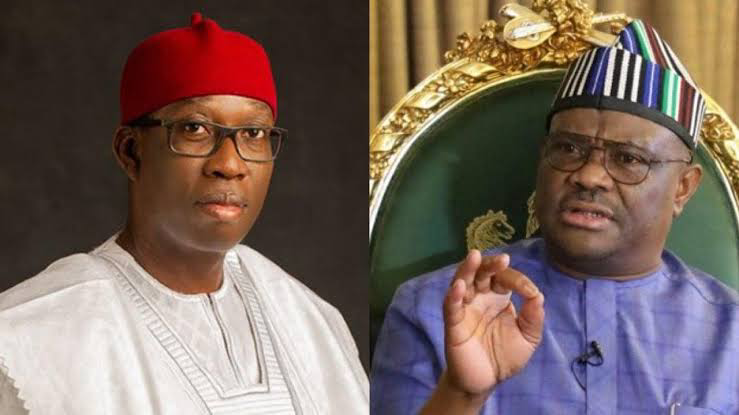 Delta Governor and Vice-Presidential Candidate of the Peoples Democratic Party (PDP), Sen. (Dr) Ifeanyi Okowa, has congratulated his Rivers counterpart, Nyesom Wike, on  the conferment of the Award of Excellence in Public Service  on him by President Muhammadu Buhari.

Wike was bestowed with the distinguished award in Infrastructure Delivery in recognition of his outstanding accomplishments in the development of Rivers State.

In a statement by his Chief Press Secretary, Mr Olisa Ifeajika, on Friday in Asaba, Okowa hailed Wike for his tremendous contributions and sterling infrastructural development of the state.

According to him, Wike has transformed Rivers with various life-changing projects embarked upon by his administration.

He said that the governor’s strides in Rivers were visible to all, even critics, adding that Wike had performed superlatively for the state and country, and, therefore, deserved to be honoured with the prestigious award.

“On behalf of my family, the government and people of Delta, I congratulate a man of courage and great sagacity, an astute politician and a development expert, Ezenwo Nyesom Wike, on his well-deserved honour.

“Since your emergence as Governor of Rivers, you have left no stone unturned in your quest to bring unprecedented infrastructural and human capacity development in your state.

“As a politician you have been a great voice on national and contemporary issues facing our great party and country, and Rivers people can attest to your doggedness, commitment and steadfastness in state craftsmanship which indeed earned you the sobriquet ‘Mr Projects’.

“On this auspicious occasion of your recognition by Mr President, I join your family, friends and well-wishers to thank Almighty God for your life which has been marked by enduring accomplishments,” Okowa stated.