Okorocha to remain in EFCC custody till May 30 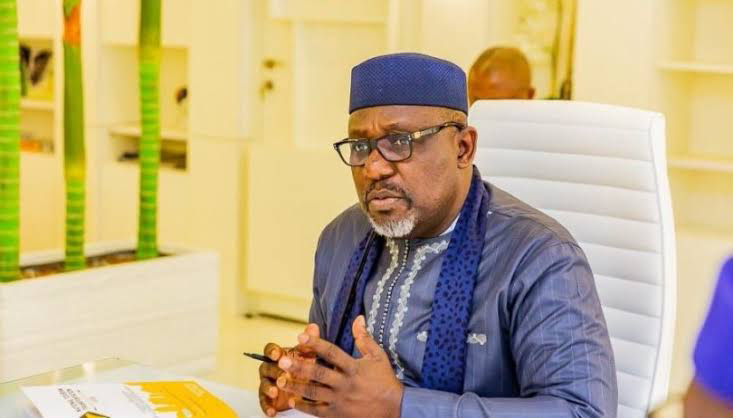 Detained former Imo State Governor, Anayo Rochas Okorocha is to remain in the custody of the Economic and Financial Crimes Commission (EFCC) till Monday, May 30, when he will be arraigned in court over the N2.9 billion money laundering criminal charges brought against him by the Federal Government.

Okorocha, a presidential aspirant on the platform of the ruling All Progressives Congress (APC) is to be arraigned before a Federal High Court in Abuja on the date.

He was forcefully arrested on Tuesday in his Abuja residence by operatives of the EFCC after over nine hours of siege on the residence.

EFCC’S legal department sources told DAILY POST on Wednesday that the anti-graft agency arrested Okorocha as a proactive measure to make him appear in court following his persistent refusal to honour court to take his plea in the money laundering charges.

Justice Inyang Eden Ekwo of the Federal High Court, Abuja had on Monday, March 28, threatened to strike out the N2.9 billion money laundering charges against Okorocha should the Federal Government fail again to cause his appearance in court.

The judge had threatened to throw out the charges following the inability of the Federal Government to serve charges on Okorocha as required by law.

At the March 28 proceedings, the Federal Government, for the second time through its counsel, Mr Cosmos Ugwu, had told Justice Ekwo that he has not been able to see Okorocha and serve him with the charges.

The cousel had informed the court that Okorocha had been evading service, but that he would make efforts and would continue to make efforts until he succeeds in serving the former Imo State Governor with the court papers.

He had subsequently applied for another adjournment to enable EFCC do everything within its power to serve the court papers, in line with provisions of the law.

His excuse for not being able to reach Okorocha did not go down well with the Judge who reminded him that same story was played out on February 22 when Okorocha ought to have taken his plea.

Justice Ekwo had said categorically that he was not going to continue to take flimsy excuses from the EFCC and would not help it to do its job.

The judge grudgingly granted the request for the second adjournment and warned the EFCC to demonstrate seriousness or else, the case would be struck out.

EFCC’S sources informed our correspondent at the Federal High Court premises that the anti-graft agency was forced to apply force against Okorocha as he allegedly refused bluntly to honour invitation extended to him thrice to appear at the Commission’s office in Abuja just for purpose of serving him the charge.

“EFCC is a civilized organization and would not take laws into its hand but suspects, especially highly placed ones should always try as much as possible to respect the law and due process so that the law can protect them.

“Arraignment in court is not a death sentence, so no one should take court for a ride or for granted. In Nigeria today, suspects can only run but cannot hide as in the case of Senator Okorocha,” he said.

The source, who did not want his name mentioned, said that nobody would be allowed to bail the Senator until after his appearance and arraignment in court on Monday.

Efforts to get EFCC’S lawyer, Mr Cosmos Ugwu comment on the matter were unsuccessful.

The Federal Government’s charges against Okorocha dated January 24, 2022, was signed by one A.O Ikota on behalf of the Economic and Financial Crimes Commission, EFCC.

Okorocha, who is currently a Senator representing Imo West in the National Assembly, is to face trial alongside six others in the N2.9 billion money laundering criminal charges.