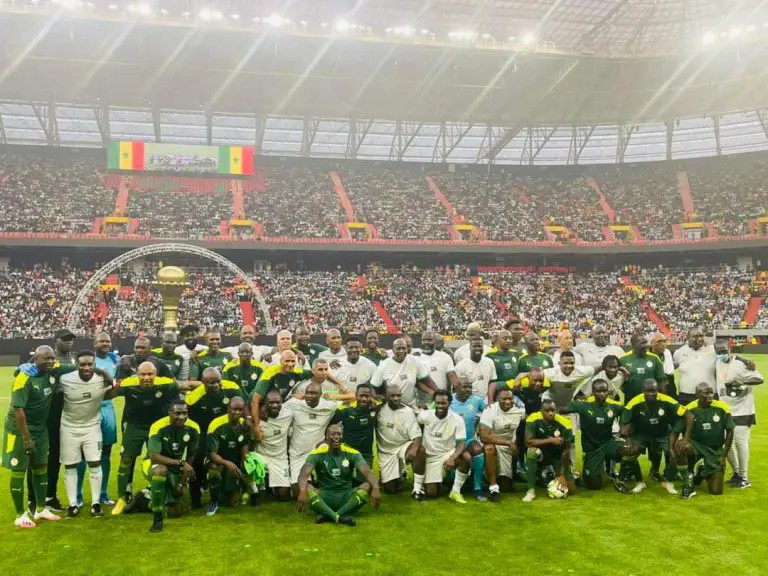 Nigerian international Jay Jay Okocha was part of the football legends that graced the inauguration of the Diamniadio Olympic Stadium in Dakar, Senegal. The Senegalese government splashed heavily on a multi-purpose stadium, which can host football, rugby and athletics and they have inaugurated it two weeks after their AFCON glory.

Reports have it that the Teranga Lions will now make the facility their new home ground as it has a capacity of 50,000. It’ll host the 2026 Summer Youth Olympics, Sports Ration say.

Okocha finished off a brilliant team move to ensure the novelty match between African Legends and Senegalese Legends ended 1-1. It was Kalidou Fadiga who opened the scoring for the hosts as the encounter was part of activities for the inauguration of the Diamniadio Olympic Stadium. African legends El Hadji Diouf, Samuel Eto’o, Didier Drogba , Emmanuel Adebayor and a host of other soccer greats entertained the over 40,000 fans and African leaders who attended the inauguration ceremony.

Eto’o says Okocha deserves a Ronaldinho kind of rating Meanwhile, Barcelona legend Samuel Eto’o has stated that Nigeria’s Jay Jay Okocha deserves to be rated as high as Brazilian superstar Ronaldinho. READ ALSO Lovely sight as Ghanaian football star meets other African legends at inauguration of Senegal’s new stadium Eto’o and Ronaldinho were teammates at Spanish club Barcelona, but the Cameroon FA president believes Okocha remains one of the most gifted footballers of this generation.

Amakhosi fans could only fantasise about an alternate history in which Okocha might have turned out in the club’s colours. He was in South Africa as part of a panel of experts during SuperSport’s coverage of the 2021 African Cup of Nations in Cameroon.