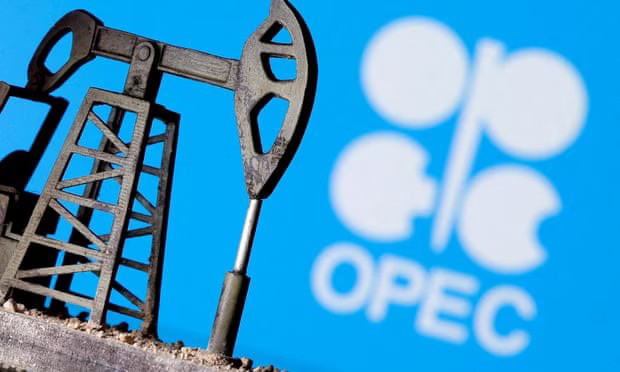 Oil prices have risen before Thursday’s meeting of the Opec cartel of oil-producing nations, as ministers prepare to set output targets for July in their first gathering since the EU imposed sanctions on Russian crude.

Opec is under pressure from some members to exclude Russia, the world’s third largest oil producer, from future quotas, in a move that could pave the way for Saudi Arabia and the United Arab Emirates to pump more oil.

The price of futures for Brent crude oil, the North Sea benchmark, rose by 2% at one point on Wednesday to $117 a barrel. Its North American counterpart, West Texas Intermediate, rose by a similar amount to just shy of $116 a barrel. Prices had fallen back from highs of over $125 earlier in the week, but bounced again as investors weighed how far production could be increased to counter the effect of sanctions.

Ministers representing Opec’s 13 members and 10 non-Opec producers led by Russia, a grouping called Opec+, are due to meet via video conference on Thursday. They are expected to approve a July increase of 432,000 barrels a day, in the latest of a series of monthly increases announced in September 2021.

Russia is now lagging the group, with its output expected to drop 8% this year. The Wall Street Journal reported on Tuesday evening that Russia’s falling production had prompted some nations, including members from Gulf states, to suggest excluding Russia from production targets, allowing other members to increase their output.

Demand for oil and energy prices have surged over the past year as major economies reopen from pandemic lockdowns, compounded by the fallout from Russia’s invasion of Ukraine. Rapid price swings have contributed to inflationary pressures and cost of living crises around the world as households struggle with higher fuel prices.

The price increases have prompted unsuccessful attempts by US president Joe Biden and UK prime minister Boris Johnson to persuade other major oil producers such as Saudi Arabia to pump more, angering environmental campaigners who argue that governments should focus instead on energy efficiency measures that could quickly reduce demand. At a meeting in Germany last week the G7 energy ministers called for Opec to produce more.

Bjarne Schieldrop, chief commodities analyst at SEB, an investment bank, said the break-up of the Opec+ group would allow Saudi Arabia and the UAE to use their spare capacity to lift production. However, he raised doubts as to whether it would ease the pressure in global markets.

“Minds in the EU and the US are focused on hurting Russian petro-income,” he said. “More oil from Saudi and the UAE will allow the west to implement sharper bans, forcing Russian oil exports lower while not blowing up the oil price. So net-net there would be no added supply for the market.”

However, Russian foreign minister Sergei Lavrov on Wednesday suggested that Russia hopes to continue to work with Opec.

Speaking in Saudi Arabia during a visit to the Middle East, Lavrov told a news conference: “The principles of cooperation on this basis retain their significance and relevance.”

The US, EU and allies such as the UK have imposed sanctions on most of Russia’s key banks involved in the oil trade, and the EU on Tuesday belatedly agreed a partial embargo on oil imports.

The UK and EU have also worked together to ban insurers from covering ships transporting Russian oil, another move to make it more difficult for Russia to export. Lloyd’s of London, the world’s oldest insurance market, said on Wednesday it was working closely with British and other governments and regulators to implement global sanctions against Russia.

“Lloyd’s supports and remains focused on the delivery of a global sanctions regime against the Russian state,” Lloyd’s said.

The EU embargo will not include oil transported through the Soviet-era Druzhba pipeline for Hungary, the Czech Republic and Slovakia, and Bloomberg Economics calculated that Russia would still receive $285bn (£226bn) this year for its fossil fuel exports, including gas on which European countries rely heavily.