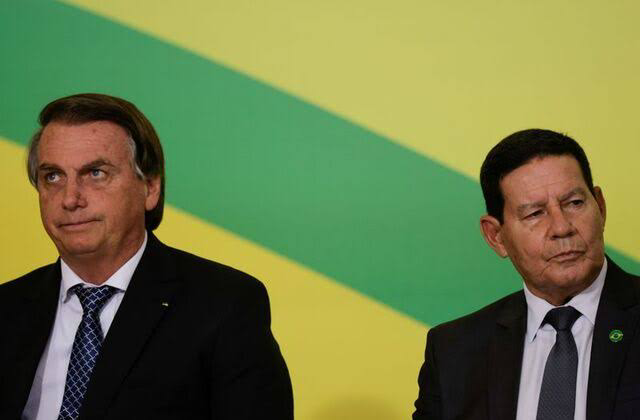 Brazilian President Jair Bolsonaro scolded his Vice President Hamilton Mourao on Thursday for condemning the Russian invasion of Ukraine and said it was not his job to speak about the crisis in eastern Europe.

Bolsonaro, who recently met with President Vladimir Putin in Moscow and said the Russian leader had peaceful intentions, had not commented on the invasion on Thursday, only posting on Twitter that he was worried about protecting Brazilian citizens in Ukraine.

Mourao condemned the invasion in comments to reporters, saying that in his view economic sanctions may not be enough and the West may need to use force.

His comments went well beyond a statement by Brazil’s Foreign Ministry expressing concern about Russia’s military operations and urging a diplomatic solution.

Speaking later to his supporters by live webcast, Bolsonaro said only he, the president, could speak about the Russia-Ukraine crisis, and that it was not Mourao’s business.

With Brazilian Foreign Minister Carlos Franca sitting alongside, Bolsonaro said his government has yet to assess the dimension of the crisis and decide what position to take.

“We traveled in peace to Russia. We depend on fertilizer imports. We want peace,” Bolsonaro, a far-right president, said.

Franca said Brazil is drawing up plans to evacuate some 500 Brazilians who are in the Ukraine and has had requests from Argentina and Ecuador to airlift their nationals, including 750 Ecuadorean citizens in Ukraine.

They agreed on the importance of finding a diplomatic solution to the crisis and “made vigorous defense of sovereignty, territorial integrity of states, the peaceful settlement of disputes,” the ministry said.