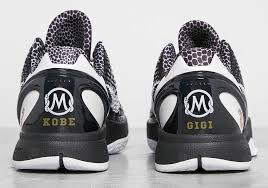 Vanessa Bryant and Nike are renewing their partnership in honor of her late husband, Kobe, and daughter Gigi.

“We’re excited to announce our partnership with Nike is going to continue! I am so proud that my husband’s shoes are still the most worn by players on NBA courts and that the demand for his shoes remain so desired by his fans around the world,” Vanessa, 39, began a statement posted to Instagram.

“With this new partnership, fans will soon be able to have access to Kobe and Gigi Nike product for years to come and with Nike donating 100% of the net proceeds yearly for Gianna’s shoes to our Mamba and Mambacita Sports Foundation (M&MSF),” she continued

Vanessa went on to write that she and Nike will also be working together to “establish a youth basketball center in Southern California that will share the Mamba Mentality with youth athletes for generations to come.”

“I know this is an inspiring moment for my husband and daughter’s global fans, and I am very appreciative of each and every one of you!” she concluded the announcement, signing off “with Gratitude for every fan around the world supporting Kobe and Gigis Legacy.”

The Bryant family’s contract with Nike expired in April last year, and at the time, Vanessa had said she “was hoping to forge a lifelong partnership with Nike that reflects my husband’s legacy.”

Nike also issued a statement of their own on Thursday, revealing that the first new shoe from the partnership — the Kobe 6 Protro “Mambacita Sweet 16” — will honor Gigi Bryant.

“Kobe Bryant means so much to so many of us, not just NBA fans but globally beyond the game,” said John Donahoe, President & CEO, NIKE, Inc., in a statement. “His impact in growing the sport, particularly encouraging women and young people to pick it up, endures as one of his deepest, lasting legacies. Together with Vanessa, we hope to honor Kobe and Gigi by championing a new generation for many years to come.”

Kobe, 41, and Gigi, 13, were killed in January 2020 after the private helicopter they were traveling in crashed in Calabasas, California. Seven others, including the pilot and three teenagers, were also killed in the crash.

Bryant is survived by Vanessa and three of their four children together: daughters Natalia, 19, Bianka, 5, and Capri, 2.