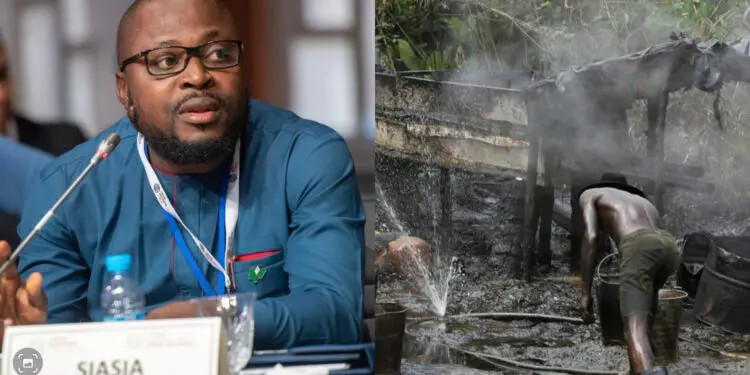 He said Governors in the Region have neglected the important element of “human infrastructure” development, and are instead focusing on building public infrastructure which may not necessarily impact the lives of the teeming youths of the region.

This, he said, may make it difficult for oil theft to end in the region, as the Government have failed in investing in building the capacity of young people.

Mr Siaisia made this observation on Wednesday in a statement issued in Port Harcourt, the Rivers State capital. He spoke against the backdrop of the recent visit of a delegation of the Nigerian Government to some Governors of the region.

The NYPF Chairman berated the country’s political elite who are known to be the primary actors of the illegality, adding that they were “using young people to fulfill their evil obligations.”

“There must be a deliberate cut out strategy to see how sustainable jobs can be created.

“Over the years we have been advocating and carrying out programmes and encouragement for young people, mostly MSME owners. We foresaw all these things happening from several years ago. We spoke about it and nobody listened.

“It is unfortunate that some of the institutions in the region that are saddled with the task to carry out interventions, have failed in their responsibilities,” he lamented.

While commending Nigerian Content Development and Monitoring Board (NCDMB) for their giant strides in improving human capacity development across the region and Nigeria by extension, he called on Government to deliberately channel resources into building the capacity of young people.

The NYPF Boss who noted that 70 to 75 percent of youths in the region are idle, worried that the injustice, stealing and mismanagement of Government resources is now a culture and a way of life, adding that there will not be normalcy in a dysfunctional environment.

“The youths are left with no choice than to take their destiny in their hands.

“Today, Nigerian Government and Officials are busy looking for solutions because the country is losing alot of revenue as a result of Oil Theft.

“Oil theft, kidnapping and criminality will remain Inevitable if we don’t focus more on building and engaging our youths in creating sustainable livelihood,” he added.

The Siasia-led NYPF held a Niger Delta Summit for Micro, Small and Medium Enterprises (MSMEs) in Port Harcourt, Rivers State in February 2021, and a sequel in Asaba, Delta State in February this year. Both programmes aggressively empowered thousands of youths in the area of entrepreneurship in the region.

Over the years, the Nigerian Government has struggled to tackle oil theft. Due to crude oil theft, Nigeria lost a staggering $1 billion in revenue in the first quarter of 2022, endangering the economy of Africa’s top producer.

This statistics was recently disclosed by Gbenga Komolafe, the head of the Nigerian Upstream Petroleum Regulatory Commission.