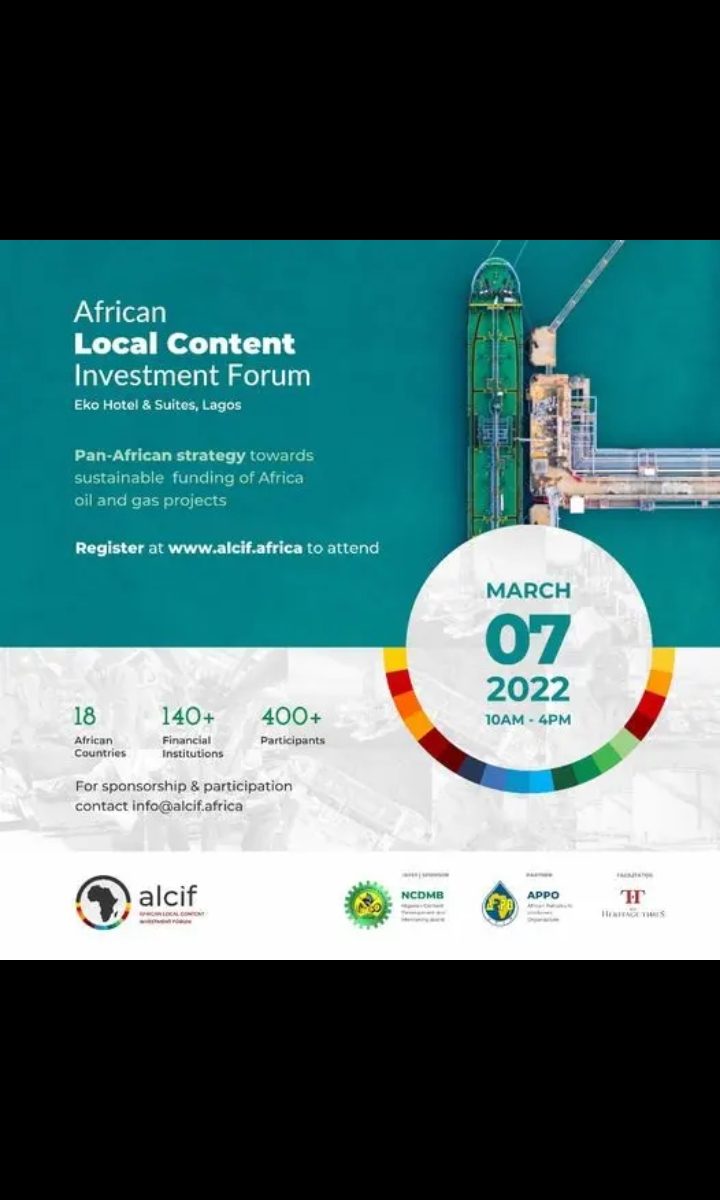 The Nigerian Content Development and Monitoring Board (NCDMB) has announced plans to host the African Local Content Investment Forum (ALCIF) at Eko Hotels and Suites, Lagos on Monday, 7th March 2022.

Expected at the event are delegates from 18 countries – mostly from the African Petroleum Producers Association (APPO), 140 financial institutions, and 400 participants from around Africa.

The ALCIF is a sequel to the 1st African Local Content Roundtable hosted by the Board in June 2021 at the NCDMB Towers in Yenagoa, Bayelsa State.

Speaking ahead of the event, the Executive Secretary NCDMB, Engr. Simbi Kesiye Wabote stated that the Africa Local Content Investment Forum would seek to elevate Africa’s indigenous oil producers and national oil companies as the next generation of project producers involved in equity financing of exploration and field development activities.

He said the forum would also position Africa’s oil and gas service companies as funding blocks for research and development of technology required for exploration and production operations and position Africa’s financial institutions as providers of debt financing for oil and gas projects.

He noted that “the ongoing global energy transition is driving most international oil companies (IOCs) to declare commitments to reduce carbon emissions thereby scaling down investments in hydrocarbons development in favour of expanding renewable portfolios.”

He added that leading global financial institutions are also reducing or eliminating portfolio allocations to oil and gas projects. The Board’s sponsorship of the Africa Local Content Investment Forum (ALCIF) is in furtherance of the Nigerian Content 10-Year Strategic Roadmap, which has a key aspiration to promote Local Content across the African continent and ensure access to market for oil and gas capacities that have been developed locally.

The Board had consistently provided guidance to several African countries on the implementation of local content policies in their jurisdictions. According to the organisers, the local content policy which has been implemented successfully in the Nigerian Oil and Gas Industry offers one of the most appealing economic development models for a self-reliant and resilient African economy.

They also noted that the energy transition agenda is posing new challenges to Africa in its quest to develop without dependence on finance, technology, and manpower from other geographical locations. Africa accounts for eight percent of the world’s hydrocarbon reserves, with an estimated 126.388 billion barrels equivalent.

The continent contributes three percent of global Gross Domestic Production despite having a population of over 1.373 billion people and being the second-largest and second-most-populous continent on earth.

Analysts believe that the continent has the human resource base to leverage its hydrocarbon, minerals, and other natural resources to improve its Gross Domestic Product (GDP) contribution.