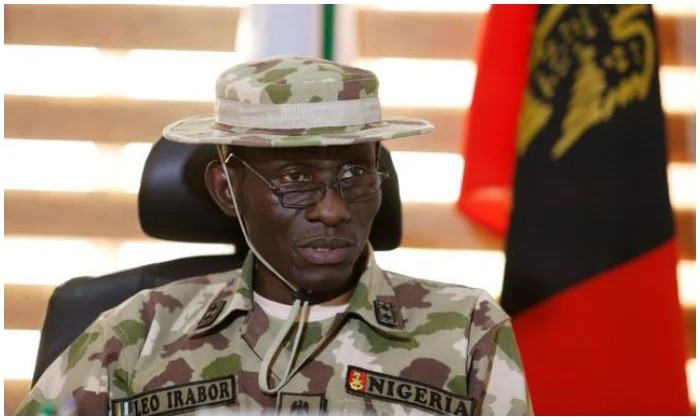 The Chief of Defence Staff, General Lucky Irabor, has ruled out the possibility of engaging foreign fighters to prosecute the anti-terrorism war in Nigeria.

He however said the military would continue to collaborate with global powers and other security stakeholders to bring an end to terrorism in the country.

He added that the military has changed some of its tactics in order to effectively combat terrorism.

When asked for his position on the calls by security stakeholders that the final stage of the war against terrorism will be faster if the country hires foreign fighters, Irabor replied, “Where lays the loyalty of the foreign fighter? To Nigeria or self?

“The men and women of the Armed Forces fight to protect Nigeria not because they are paid to do it. It is because they, we see it as a duty.

“Certainly, we will continue to collaborate with other global powers and defence institutions, but we are not going to outsource our primary responsibility.”

When also asked how the strategies used to fight terrorism in Nigeria have evolved, he replied, “Some of our tactics have changed, but our vision remains the same – We want to bring an end to beginning of all terrorism. We are achieving these in collaboration with stakeholders in national security and defence.

“Globally, terrorism has evolved in the last two decades. The case is not different in Nigeria. What we are doing differently is to be ahead of this evolving trend. The Armed Forces of Nigeria is more prepared for all scenarios.

“Unfortunately, it will do us more harm than good if we go public to reveal all we have done or what we have stopped doing or will do. The good news is that in all scenarios, Nigeria will win. Let us never forget the words of Winston Churchill, ‘Success is not final, failure is not fatal: it is the courage to continue that counts.’

Irabor further explained that the military is working together with organisations to avoid future defeats in major battles in the North East and foster a non-kinetic approach to achieve peace in the region.

He added, “A better way to look at it is that in the last twenty years, the military has won major battles in the North East. We have won most of our battles and that is why we are winning the war. This not just an opinion, it is the fact. The most recent evidence from the Global Terrorism Report confirms this.

“A war is made up of several battles. In a perfect world, you plan to win everything, but perfection never happens in war. Sometimes the way forward is backwards. Sometimes you lose a battle to win the war.

“Just as nobody can use only one finger to write, the Armed Forces of Nigeria cannot write all the wrongs in security by itself. There is a lot of work that some of these organizations have put in especially to protect women and children in the North East. A lot more still needs to be done on the non-kinetic approach to achieving peace.”