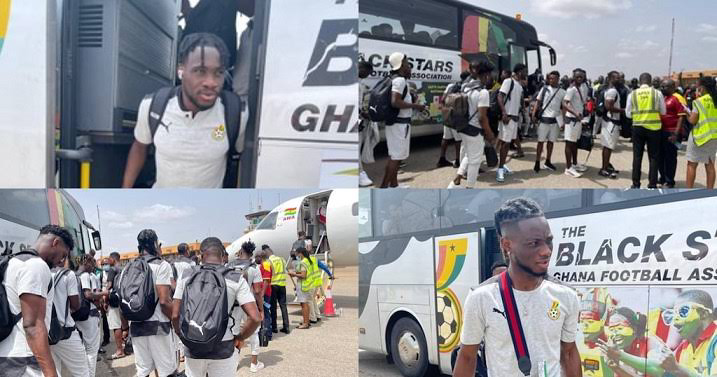 The players and officials of the Ghana National Team have arrived in Abuja, ahead of Tuesday’s crucial second leg World Cup playoff tie against the Super Eagles of Nigeria.

The Ghanaian contingent arrived Monday afternoon aboard a chartered aircraft at the Nnamdi Azikwe International Airport and had a contingent of 25 players, technical crew members, and officials of the Ghana Football Association (GFA).

The Black Stars settled for a goalless draw at the Baba Yara Stadium on Friday in the first leg despite having over 40,000 vociferous crowd rooting for them.

Though they did not get any advantage from the first leg, Ghana can still pick the ticket to the World Cup if they can secure a score draw at the Moshood Abiola Stadium on Tuesday while a loss will automatically eliminate them.

Ghana captain Ayew, who is suspended for the match, said Nigeria’s home record is not particularly impressive and believes the Black Stars will surprise the Super Eagles on Tuesday

“As far as I am concerned, I am very much optimistic that the Black Stars can make it to the World Cup in Qatar.”

“I also know that Nigeria’s home record is not really good. I also believe that the Super Eagles will be under a lot of pressure in Abuja on Tuesday, particularly as they could not score against us.”

The Black Stars will have their solitary training session in Nigeria ahead of Tuesday’s game at the Moshood Abiola Stadium by 6 p. m, Monday.