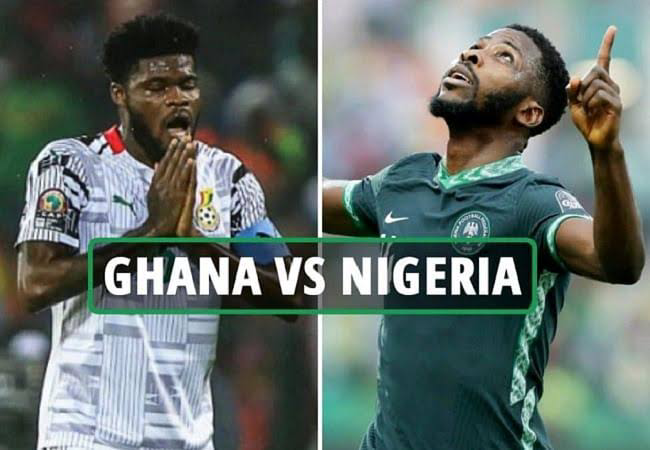 The Super Eagles of Nigeria have failed to qualify for the 2022 World Cup after losing on away goals to Ghana.

Although the match ended 1-1 in Abuja Tuesday and 1-1 on aggregate, the away goal by Ghana secured the World Cup ticket for the Black Stars.

Ghana qualified for the World Cup for a third time after a 1-1 result against the Super Eagles of Nigeria on Tuesday at the MKO Abiola Stadium in Abuja. Ghana took the lead through Thomas Partey’s long-range shot which somehow found a way past Francis Uzoho in the 10th minute. It had undertones of the goal that beat Maduka Okoye at the Nations Cup in January.

That goal counted double in the event that the match ended 1-1. The Eagles thus faltered at the last hurdle with almost everything in their favour after holding the Black Stars to a barren draw last Friday in Kumasi.

The Eagles responded and in the 12th minute almost found the equaliser through Victor Osimhen who chased down a ball deep into the Ghana half but his shot was just wide from a very tight angle. Six minutes later, the Eagles found a way after Ademola Lookman was fouled in the box by Denis Odoi.

It took VAR to call the centre referee’s attention to the monitor to give the penalty. Captain William Troost-Ekong stepped up and sent Joseph Wollacott the wrong way. It was a liftoff for the capacity stadium that had come to cheer the Eagles to Qatar.

Osimhen thought he had plundered a lead in the 34th minute but another VAR review showed the Napoli man had stepped offside just before Etebo released the ball.

The second half was a ding-dong affair after Ghanaian coach, Otto Addo, made a triple substitution at the start of the half that showed the intent to preserve their advantage. Wolacott made a fantastic save from a Balogun header in the 71st minute as the Black Stars kept the Eagles at arm’s length.

Five minutes were added on but the Eagles could not find a way through as the dream to qualify for a seventh World Cup faded in a packed MKO Abiola Stadium. The Ghanaians celebrated ferociously after getting one over their bitter rivals. The Eagles will try again in four years.