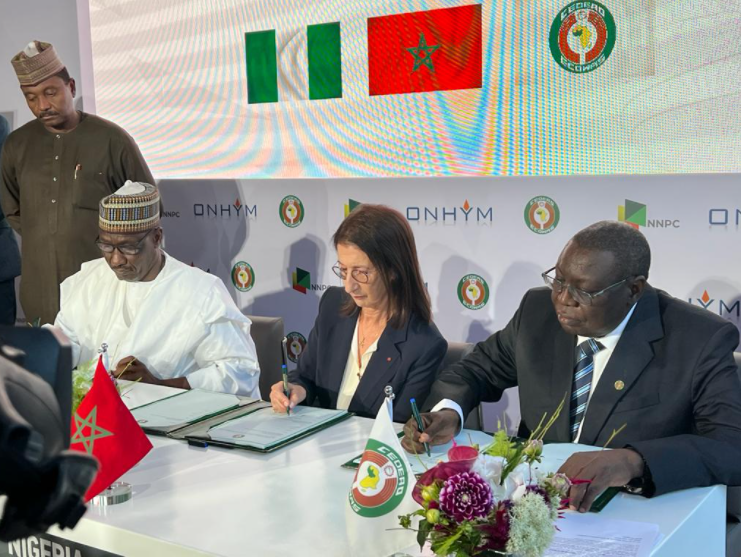 The Nigeria-Morocco Gas Pipeline Project officially kicked off following the Memorandum of Understanding(MOU) signing between ECOWAS and Morocco.

The Nigerian National Petroleum Company Limited revealed this in a statement issued Thursday after a meeting at the Sofitel in Rabat, Morocco, between the two countries and ECOWAS.

The 5,600-kilometer pipeline would run through 13 African countries before connecting to Europe via Morocco.

NNPC boss Mele Kyari noted that the benefits include the creation of wealth and improvement in the standard of living, integration of the economies within the region, mitigation against desertification and other benefits that will accrue as a result of reduction of carbon emission.

The NNPC said that this was a significant step in fulfilling the FG’s drive toward harnessing Nigeria’s abundant gas resources.

“The NMGP is a 5,600 KM gas pipeline, traversing 13 African countries, which when completed will provide gas from Nigeria to the West African countries through the Kingdom of Morocco and subsequently to Europe,” it added.

Mele Kyari, NNPC Ltd CEO, who signed on behalf of Nigeria, described the development as a very important milestone in the NMGP project in which all key stakeholders have come together to reaffirm their commitment to delivering the project.

Kyari also added that both governments have made concerted efforts toward reaching the agreement.

“Some of the benefits include creation of wealth and improvement in standard of living, integration of the economies within the region, mitigation against desertification and other benefits that will accrue as a result of reduction of carbon emission,” Kyari said.

Kyari added that NNPC will facilitate a continuous supply of gas and provide other enablers such as required land for the first compressor station for the pipeline to be deployed in Nigeria.

NNPC says the pipeline will originate from Brass Island in Nigeria and Terminate in the North of Morocco, where it will be connected to the existing Maghreb European Pipeline that originates from Algeria to Spain.