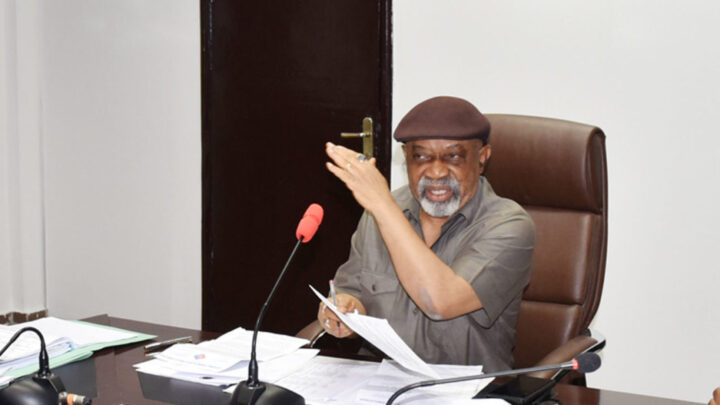 Chris Ngige, minister of labour and employment and presidential hopeful, says he doesn’t need to resign over section 84(12) of the Electoral Act 2022.

He spoke on Thursday when he featured on Channels Television.

There has been controversy over the aforementioned section which states: “No political appointee at any level shall be a voting delegate or be voted for at the convention or congress of any political party for the purpose of the nomination of candidates for any election.”

According to Ngige, the section does not apply to him as he falls under the ‘public officer’ category as stated in the constitution.

“The constitution is the grand norm – the biggest and heaviest of all the laws. Section 137 has given areas of qualifications for presidential candidates. The constitution says public officers should resign one month to election,” he said.

“The issue now is ‘is the minister a public servant’? Yes, I’m a public servant. Go to schedule 5, you’ll see me listed there – ministers, commissioners, governors, vice-president, president and heads of ministerial bodies.

He also spoke on the N100 million fixed by the All Progressives Congress (APC) for the presidential nomination form.

“That’s what my party NEC fixed. Whether I’m happy with that or not, that is their own postulation. They have done their calculation; they have done their work. And Abdullahi Adamu, the chairman, is a very serious man if you know him well. He was my colleague in the governors’ forum and he was my colleague in the seventh senate. He’s a very serious-minded person,” Ngige said.

“For Adamu to say N100 million, he has seen certain things. I was a party official in PDP unfortunately, and a NEC member, so I know the workings of a party. I’m not going to crucify them or say ‘crucify them’.

“Let me give you a critical example. After the selling of these forms, candidates emerge. When you tell them to contribute to the party, you won’t see them. That’s our experience in PDP, ACN, APC. And they have done the right thing to encourage the young ones that they have 50 percent discount. That’s magnanimous enough.

“I was budgeting N50 million — I and my supporters. But when the thing came out and it’s N100 million, they have started calling me. I have supporters, well-wishers. Don’t worry about me.”

On why he thinks he qualifies for the presidency, Ngige said his time in the civil service has given him the necessary experience.

“I’ve been in public service for 40 years. I started work in Lagos in 1981 as a medical officer 1, and rose to become deputy director. I understand the civil service. I have passed through the mills of the public service of Nigeria – both political party-wise, civil service-wise, legislature, executive at state and national level. I know the problems. I’m in the room,” he