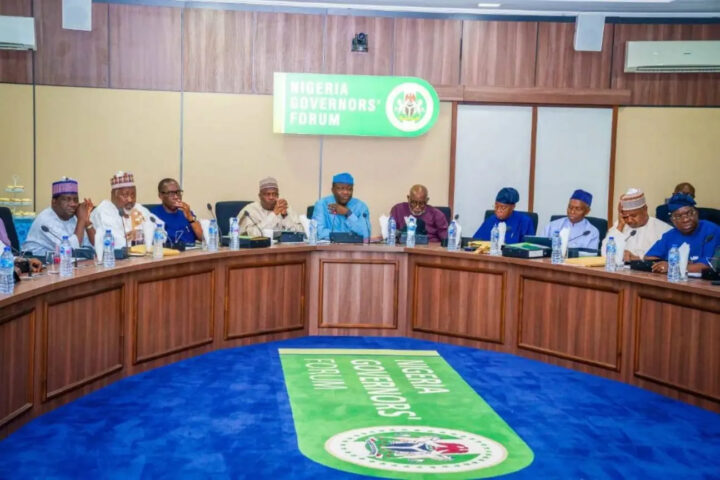 The NGF said this in a memo forwarded to Abdulkadir Abdullahi, chairman of the house of representatives ad hoc committee investigating the volume of daily fuel consumption in Nigeria.

On Tuesday, the committee summoned Mele Kyari, group managing director of the Nigerian National Petroleum Company (NNPC) Limited, to appear before it to provide details on the volume of petrol consumed in the country.

The ad hoc committee also summoned Godwin Emefiele, governor of the Central Bank of Nigeria (CBN); Zainab Ahmed, minister of finance, budget and national planning and the permanent secretary of ministry; accountant-general of the federation; managing director of the Pipelines and Product Marketing Company (PPMC); and Timipre Sylva, minister of state for petroleum resources and permanent secretary of the ministry.

According to the memo, the governors said PMS consumption by states showed that a third of the country accounts for over 65 percent of the consumption, adding that most states with high consumption have borders with neighbouring countries.

With high petrol subsidy costs, they said allocation from the federation account would not be enough to cover even salaries.

The state governors referred the lower chamber of the national assembly to a November 2021 report by its national executive council’s ad hoc committee interfacing with the Nigeria National Petroleum Corporation on the appropriate pricing of PMS in Nigeria, chaired by Nasir el-Rufai, governor of Kaduna.

TheCable had reported that the committee recommended N302 per litre as the price of premium motor spirit (PMS), better known as petrol, from February 2022.

“The following are some of the major findings relating to the volume of fuel consumed in the country,” the memo reads.

“Remittances to the Federation Account Allocation Committee have continued to shrink as NNPC recovers shortfall quite arbitrarily from the Federation’s crude oil sales revenue. FAAC deductions for PMS subsidy are above 2019 levels, even without adjusting for the reduced purchasing power of the naira due to inflation and FX rate deterioration.

“An analysis of the average monthly PMS consumption by states showed that a third of the country accounts for over 65 percent consumption of PMS. The analysis showed that the following states Lagos, Oyo, Ogun, Abuja, Delta, Kano, Kwara, Edo, Rivers, Kaduna, Kebbi and Adamawa accounted for 65 per cent of PMS consumption in the country. Most states with high PMS consumption either have borders with neighbouring countries or are in close proximity, this has been an avenue for smugglers to benefit from profitable arbitrage opportunities in PMS pricing.

“In the current fiscal regime, remittances to FAAC would continue to shrink as NNPC recovers this shortfall from the Federation as a result of crude oil price recovery. The report recommended a PMS pricing structure that addresses regional arbitrage and smuggling of PMS and provides additional revenue to the Federation Account. There is a significant market opportunity for additional export revenue streams for Nigeria to be had given the price parity with our neighbouring countries.

“Privatisation of the three government refineries as is, or after their full rehabilitation if affordable and viable, and expediting the licensing procedure for modular refineries will reduce the recurring government expenditure on refinery maintenance and increase the country’s refining capacity.”

The memo added that most states are “already experiencing fiscal stress, with 30 out of 36 states recording fiscal deficits in 2020, including Lagos”.

“Fiscal pressures are growing unsustainably with the PMS subsidy significantly reducing the flow of revenues into the Federation Account. Thirty-five out of 36 states are likely to see transfers from the federation fall (in nominal terms) between 2021 and 2022, with the average decline projected to be about 11 per cent. Most states are already experiencing fiscal stress, with 30 out of 36 states recording fiscal deficits in 2020, including Lagos and every oil-producing state except Akwa Ibom.

“With the projected decline in gross distributable federation revenues in 2022, fiscal deficits and debt burdens will grow even larger and faster. This will mean that transfers from the federation will not be enough to cover even salaries, and certainly not recurrent costs, which are growing in nominal terms.

“With the coming into effect of the Petroleum Industry Act, gross oil & gas revenues could be (much) lower than currently projected because of the new fiscal terms and the earmarking of deductible revenues specified in the PIA, and that could reduce net oil & gas revenues even further.