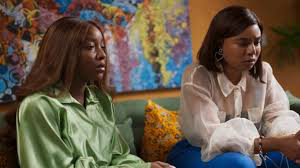 Netflix has released the trailer for its first original TV show out of Nigeria, “Blood Sisters.”

Produced by leading Nigerian production company EbonyLife Studios, founded by Mo Abudu, the four-part crime thriller directed by Biyi Bandele and Kenneth Gyang will launch globally on the streaming service on May 5. The show is Abudu’s latest project for Netflix as part of her multi-title deal with the platform.

Set in Lagos, “Blood Sisters” follows a Nigerian wedding where the bride — who is fed up of being beaten up by her partner — accidentally kills the groom the night before their big day. The show tackles themes of intra-family relationships, physical and substance abuse, love, commitment and relationships.

An official description bills “Blood Sisters” as “an ode to life in the city [of Lagos] as it brilliantly juxtaposes the various socio-economic divides in Africa’s most famous commercial and social hub.”

EbonyLife Studios CEO Abudu said: “‘Blood Sisters’ is a crime thriller, which is a new genre for us, so the prospect was challenging but very exciting! It was also a particularly unique and intense experience as we shot during the pandemic, but we remained committed to the vision we share with Netflix — to tell authentic and exciting African stories with superb production values.”

Abudu’s titles with Netflix include the movie “Òlòturé,” which has already been released, and a highly anticipated adaptation of Wole Soyinka’s “Death and the King’s Horseman.” The London and Lagos-based executive also has a first-look TV deal in place with Sony Pictures Television