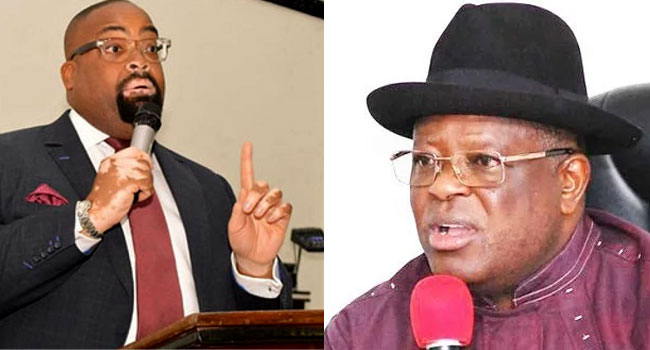 The Nigerian Bar Association (NBA), has condemned the statement credited to the Governor of Ebonyi State, Dave Umahi, describing the judgment that sacked him from office as jungle justice.

Justice Inyang Ekwo of a Federal High Court sitting in Abuja, had, on Tuesday sacked the governor, his deputy, Eric Kelechi Igwe and 16 members of the Ebonyi state House of Assembly over their defection from the Peoples Democratic Party (PDP) to the All Progressives Congress (APC).

The court described their defection as illegal and ordered Umahi and Igwe to stop parading themselves as Governor and Deputy Governor of Ebonyi state.

But, the NBA in a statement signed by its president, Olumide Akpata, described Umahi’s statement as unfortunate.

The NBA boss, in the statement, said, ”We noted with utter dismay, the unfortunate and totally unacceptable reaction of H.E. Engr. Dave Umahi, to the Judgment of the Federal High Court, Abuja, delivered on 8th March 2022, coram Honourable Justice Inyang Ekwo which inter-alia ordered him and H.E., Mr. Eric Kelechi Igwe, to vacate the offices of Governor and Deputy Governor, respectively, of Ebonyi State on grounds of their defection from the Peoples Democratic Party (PDP) to the All Progressives Congress (APC).

”Following the Judgment, Engr. Umahi, in the course of a Press Conference – video evidence of which is currently making the rounds on both new and mainstream media – threw caution to the wind and deployed very uncomplimentary adjectives and intemperate language in characterizing both the Judgment and Hon. Justice Ekwo, including but not limited to describing the Judgment as “jungle justice” and His Lordship as “a hatchet man”.

“As if these were not enough, Engr. Umahi accused the Court of “murdering justice” and also arrogated to himself the judicial powers and magisterial authority to declare the judgment of a court of competent jurisdiction as null and void while unashamedly declaring his intention to disregard the Judgment in favour of another.