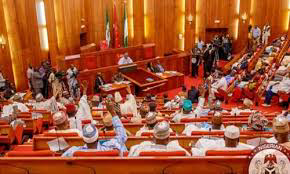 The National Assembly has transmitted 44 Constitution Review Bills to the 36 State Houses of Assembly for further legislative work.

The Clerk to the National Assembly, Amos Ojo, on Tuesday, presented the legislations to Clerks of the 36 State Houses of Assembly, in Abuja.

The Chairperson, Forum of Clerks of State Houses of Assembly, Lyna Ocholor, received the bills on behalf of 34 of her colleagues present at the ceremony.

Ms Ocholor, who is the Clerk to the Delta State House of Assembly, pledged that her colleagues will carry out necessary legislative processes required for the bills to be considered by the various State Houses of Assembly.

This paper also reported how the lawmakers rejected all the five gender bills that sought to promote more opportunities for women in political parties, governance and the society at large – triggering protests from over 200 women groups across the country.

The Nigerian federal legislature had voted to deny citizenship to the foreign-born husband of a Nigerian woman and the ability to take indigeneship of their husband’s state after five years of being together.

They also voted against 35 per cent affirmative action in party administration and leadership as well as specific seats for women in the National Assembly.

The women had accused the lawmakers of choosing to deny women the opportunity of inclusion and representation in governance by voting against the bills.

The House of Representatives has, however, agreed to reconsider three of the bills.

It is not clear if the Senate will reconsider the bills as well.

With the 44 bills transmitted to the State Assemblies, each legislation will require at least two-thirds of the 36 assemblies and the president’s assent to become law.