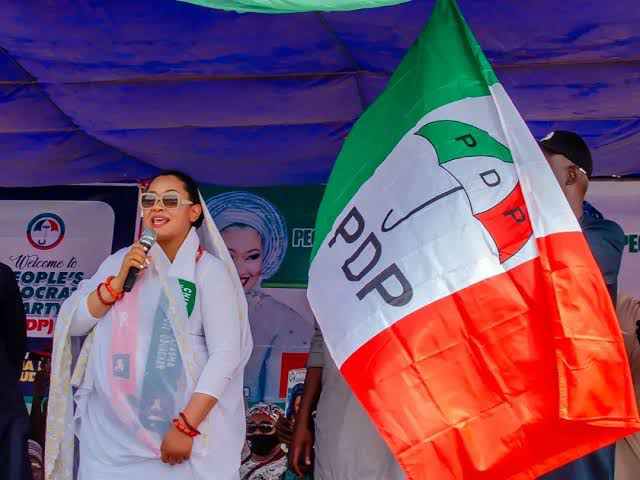 She defeated Mamud Attah by 159 to 13 votes at the primary election held in Okene, while others got no vote.

Akpoti-Uduaghan, aka, the Amazon of Kogi politics on March 20 defected from Social Democratic Party (SDP) to the PDP to contest the senatorial primary election with thousands of her supporters.

She was the 2019 senatorial candidate of the SDP and hails from the same central senatorial district as the state governor, Yahaya Bello, who is in the All Progressives Congress (APC).

Akpoti-Uduaghan, after being declared the winner of the election, extended an olive branch to her co-contestants, urging them to join hands with her to win in the 2023 election.

“Kogi Central Senatorial District is our home and we must join hands to ensure that we build it up to a better place for all of us to dwell.

“I urge you all to join hands with me in the struggle to give our party, the PDP the desired victory at the 2023 general elections,” she pleaded

Akpoti-Uduaghan commended the peaceful conduct of the election and pledged to bring further development to the district if elected as its senator.

Akpoti-Uduaghan after the 2019 governorship election in Kogi State, called on the Independent National Electoral Commission (INEC), to cancel the poll in the Kogi Central Senatorial District.

In a petition to INEC, she alleged that there was no voting in the affected area due to violence, alleging that thugs of the ruling APC were responsible for the violence.