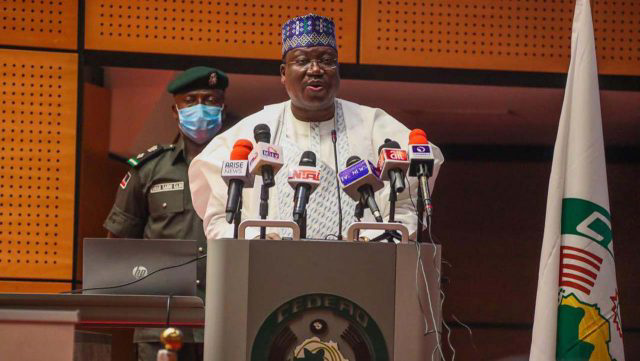 The President of the Senate, Alhaji Ahmad Lawan, says the National Assembly will pass the 2023 Appropriation Bill of N20.5 trillion before the end of December.

He made this known on Tuesday in Abuja at a reception organised to celebrate the national honour of Grand Commander of the Order of Niger (GCON) bestowed on him by President Muhamadu Buhari.

The News Agency of Nigeria (NAN) recalls that Buhari on Friday presented the 2023 budget before a joint session of the National Assembly.

The budget is tagged “Budget of Fiscal Sustainability and Transition”.

Lawan, in a speech at the reception, said that the Senate would begin debate on the bill on Wednesday.

“Tomorrow, we will start the debate on the 2023 appropriation bill. Like we did for the three previous sessions, we are going to pass it before the end of December.

“We are purposeful and we are focused. It’s not for nothing that the presidency decided to honour 12 of us.

“They know our contribution to not only the administration of good governance but also the stability of the polity.

“I strongly believe that the national assembly of today has provided so much inputs into political stability in Nigeria. The records are there.

“People can look at what we have done and also those things that we didn’t do. I believe that our colleagues in the 9th senate worked so hard.”

On the number of female senators, the senate president said: “We don’t know why the number is small but they have capacity. These are very experienced legislators.

“We wish to see more female legislators. That’s only logical,” he said.

On the national honour, Lawan said that it was a special day for the National Assembly.

“The number of recipients from the Senate this time is the highest. Every senator deserves the award.”

He said that his fellow colleagues were his good friends who ensured that the productivity in the senate rose.

“We judiciously agreed that anything that will be good for Nigerians must be done.

In a goodwill message, the Senate Leader, Ibrahim Gobir, hailed the senate president on the receipt of the award.

He said that Lawan had proven that he was a role model to many.

“You have done quite a lot. The Senate will continue to remember you forever for what you have done.”

On his part, Sen. George Sekibo (PDP-Rivers), while showering praises on Lawan declared: “If there is anything higher than this, you merit it.

“Since 1999, you have worked tirelessly. You are one of my mentors who is committed to service and loyalty.

“If anyone will claim success in this administration, it is you. The honour fits you. There are many opportunities, keep up the good work,” Sekibo said.

Sen. Sani Musa, Chairman, of the Senate Committee on Services, who was honoured with the Commander of Order of Niger (CON), said that the honour came at the right time under the tutelage of the senate president.

“The senate president has taught us to be dedicated to the job. I owe this award to him.

“The award will spur us to do more,” Musa said.

PREVIOUS POST Tinubu, govs, others in crucial meeting over campaign
NEXT POST Tobi Amusan makes history, becomes first Nigerian to be nominated for World Athlete of the Year Award