Naomi Campbell, 51, introduces her baby to the world on British Vogue cover,Reveals She Is ‘Not Adopted 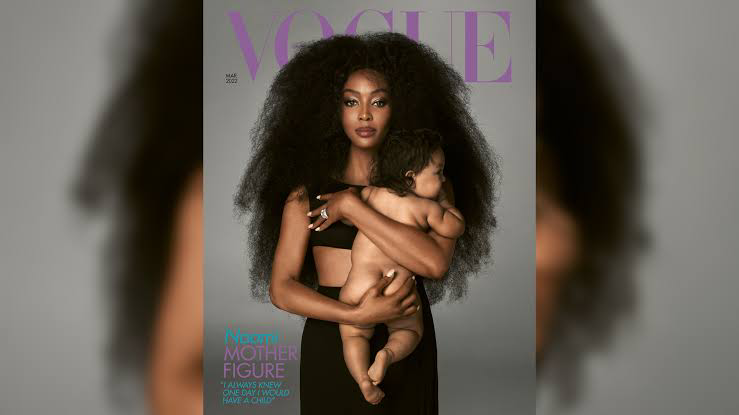 Naomi Campbell is giving fans a peek at her beautiful baby daughter.

The 51-year-old supermodel posed on the cover of the March issue of British Vogue holding her 9-month-old daughter, whose name she has chosen not to reveal, in a photo shot by fashion photographer Steven Meisel. Inside the magazine pages, Campbell opened up about how motherhood has changed her.

“I can count on one hand the number of people who knew that I was having her,” said Campbell. “But she is the biggest blessing I could ever imagine. It’s the best thing I’ve ever done.”

Campbell, who announced on Instagram in May that she had welcomed her first child, provided a few more details about how she came to be a mom. “She wasn’t adopted — she’s my child,” she said.

“I always knew that one day I would be a mother, but it’s the biggest joy I could ever imagine. I’m lucky to have her and I know that,” she gushed.

Having a baby of her own is bringing back happy childhood memories for the fashion legend while also showing her the kinds of fun little ones today get into. “I’m reliving nursery rhymes, playing and discovering how many great new toys there are out there in the world! And dolls! Things I couldn’t even dream of,” she said.

Campbell, whose modeling career keeps her on the road, said traveling with her daughter has proven to be easy.

“I’m lucky my little one loves to travel like me — no whimpering taking off or landing,” she boasted. “She’s a good girl: she sleeps very well, she hardly ever cries and I’m told she’s very alert for her age.

“She’s just started waving, which is fun. She laughs a lot. She’s almost talking,” she said, adding, “I think she might walk before she crawls. And she’s got six teeth already.”

Perhaps it’s no surprise that Campbell’s daughter, who’s already met some of her mom’s famous modeling pals, including Cindy Crawford and Christy Turlington, proved to be a natural when it came time to pose for her first cover.

“She loves the light. She’s inquisitive. She was looking at everyone — she looks at people right in the eye and for a very long time. She was taking it all in,” said Campbell.

Asked what the biggest surprise has been her about motherhood so far, Campbell replied, “My daughter comes first.”