My Greatest Asset To My Children Is Education, I’m Not Leaving Anything For Anyone To Inherit – Buhari 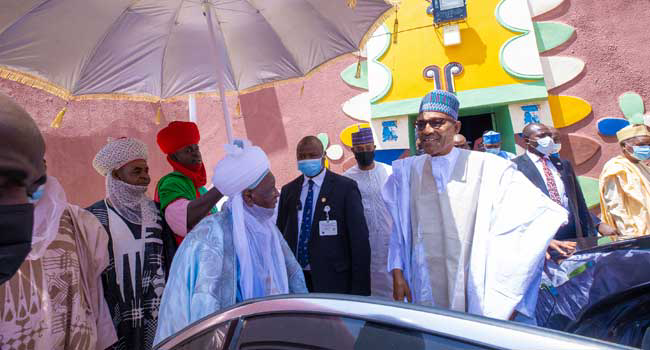 President Muhammadu Buhari on Wednesday said he is not leaving any inheritance behind for his children, saying his greatest asset to them is education.

Buhari stated this when he visited the Emir of Daura, Dr Faruk Umar Faruk, at his palace on Sallah homage.

During the visit, he urged parents to inculcate right values in children, including deep fear of God, respect for constituted authorities, and living a purposeful life through continuous education.

“They already know that I am not leaving anything for anyone to inherit. My greatest legacy to the children is to ensure they are properly educated,” the President was quoted as saying in a statement issued by his media aide, Garba Shehu.

“My focus has always been on training the children to be relevant wherever they find themselves. I told my children, particularly the girls, that they can only get married after getting a first degree.”

The President also called for children to be taught history because, without an understanding of their backgrounds, they will find it hard to be patriotic, responsible, and respectful.

He also urged the youth to seek education, not for government jobs that are unavailable but to arm themselves with skill and ability to fight poverty and to meet the needs of the 21st Century.

“We should ensure the children get a proper education. The knowledge they acquire should not be towards getting government jobs.  We don’t have jobs in government anymore. With technology, governments are becoming smaller, nimble, and efficient.

“Emphasis should now be on skills acquisition and competence in creation and deployment of technology. During the Covid-19, we asked all level 12 downward to stay at home, and surprisingly the systems worked effectively,” the President stated.

Buhari told the Emir of Daura that he will visit Daura more regularly, preparatory to the handing over in May 2023, adding that the demands of his office were responsible for the limited visits.

“This is the longest I have been away from home. In fact, the Emir took to the court of public opinion at the prayer ground, when he openly told everyone that I had not visited Daura for close to a year,” he added.