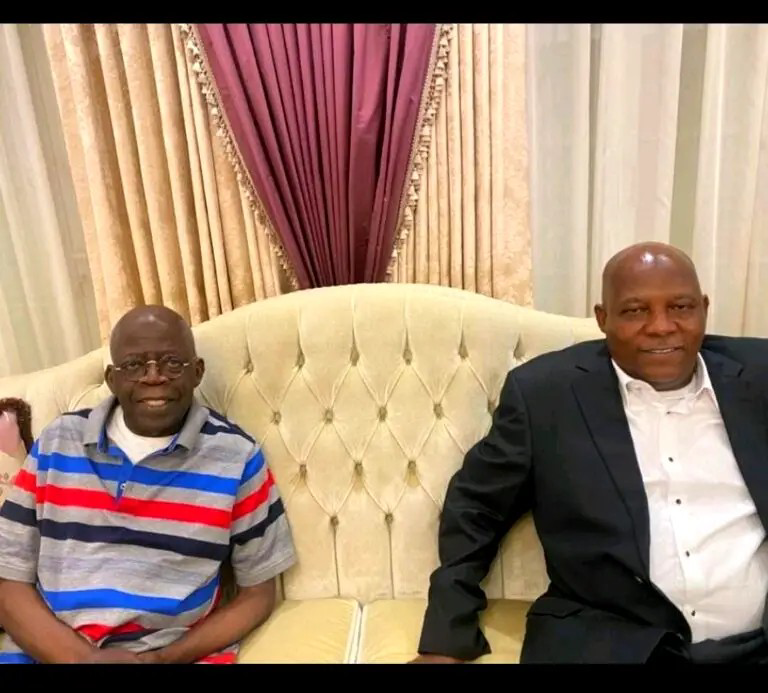 Presidential Candidate of the ruling All Progressives Congress APC, Asiwaju Bola Ahmed Tinubu has downplayed the potential backlash his choice of a Muslim running mate, Kashim Shettima had generated even before his unveiling, saying his action is actually a reflection of his belief in Nigeria’s diversity.

In a 35-paragraph statement issued on Sunday after unveiling Shettima as his substantive running mate, Tinubu, in direct reference to the Muslim-Muslim ticket of Chief MKO Abiola and Alhaji Babagana Kingibe declared that the spirit of 1993 is now upon Nigeria.

He said; “I am mindful of the energetic discourse concerning the possible religion of my running mate. Just and noble people have talked to me about this. Some have counselled that I should select a Christian to please the Christian community. Others have said I should pick a Muslim to appeal to the Muslim community. Clearly, I cannot do both.

“Both sides of the debate have impressive reason and passionate arguments supporting their position. Both arguments are right in their own way. But neither is right in the way that Nigeria needs at the moment. As president, I hope to govern this nation toward uncommon progress. This will require innovation. It will require steps never before taken. It will also require decisions that are politically difficult and rare.

“If I am to be that type of President, I must begin by being that type of candidate. Let me make the bold and innovative decision not to win political points but to move the nation and our party’s campaign closer to the greatness that we were meant to achieve.

“Here is where politics ends, and true leadership must begin. Today, I announce my selection with pride because I have made it not based on religion or to please one community or the other. I made this choice because I believe this is the man who can help me bring the best governance to all Nigerians, period, regardless of their religious affiliation or considerations of ethnicity or region.

“May I say this to all of you, especially to those who will be disappointed in my selection based on religious considerations. I will not and cannot ignore the religious concerns and ethnic sensitivities of our people. Taking them into due consideration is an important part of good and able governance. But religion, ethnicity and region cannot always and fully determine our path. To forge ahead as a nation toward development and prosperity, we must break free of old binds. We must recalibrate our political calculations to where competence and fairness matter more than reductive demographics.

“This is why, today, I announce the selection of Senator Kashim Shettima as my partner and running mate in the mission to advance and reclaim the fortunes of this great country and the hopes of its people.

“I am aware that many will continue focus on a particular detail, the question of his faith.

“However, if we truly understand the challenges upon us a nation, then we must also see the imperative of placing competence in governance above religious sentiment.

“In 1993, Nigerians embrace Chief MKO Abiola and a fellow Muslim running mate, Baba Gana Kingibe in one of our fairest elections ever held.

“The spirit of 1993 is upon us again in 2023. As such, the ticket we present today represents a milestone in our political history. It symbolizes our party’s determination to be a leading light among political parties in Africa”, he added.

He recalled how in full compliance with existing laws and regulations, he submitted all necessary documents regarding his nomination as the APC presidential candidate to the Independent National Electoral Commission INEC.

However, Tinubu said as was expected, the choice of his running mate remained an open and burning question.

“This gave rise to much speculation and debate. Recent events [the voluntary withdrawal of my dear friend and brother Ibrahim Masari] mean that I am called upon, today, to put an end to the speculation.

“I have never been an indecisive man and have no present intention to become one.

“What I am, however, is a democrat. And a democrat must listen to, and consult with, the people and his advisors so that he may reform and govern wisely and on their behalf. This I have done. My political career was not built on blind indifference to the views of others. I appreciate the perspectives of leading members of the party, political allies and key national figures who see Nigeria’s future as I do. They gave me their views so that I might add their valuable insights to mine to reach the best decision possible and do so in a manner that strengthens the institutional fabric of our party as well as accelerating the evolution of our political democracy.

“I am also a founding member of the APC. I hold our party’s core principles close to heart such that I shall do nothing to betray the spirit in which the party was created.

“Having now listened to the sage, careful advice of a broad section of the party and of the nation, there are a few points I feel I must make about the exceptional and extraordinary person with whom I will share the APC ticket and the principles of open and good governance that informed this choice.

“A dominant theme of my political history and my personal life is my staunch belief in our diversity. Greatness lies in embracing our diversity and making it work to enhance the dynamism and justice of our political system. My selection of a running mate comports entirely with this longstanding inclination”, he added.

Tinubu disclosed that the concurrence of his party in this matter has been a source of comfort and encouragement as it not only represents a departure from other political parties but one that truly may well be the best hope for democratic good governance in Nigeria.

He said; “I realize the momentous times we have entered. I know what lies in the balance. I also know that our political choices and activities send both intended and unintended signals to portions of the Nigerian electorate.

“All my life, my decisions regarding the team around and supporting me have always been guided by the principles of competence, innovation, compassion, integrity, fairness, and adherence to excellence.

“When I was Governor of Lagos State, these principles helped me assemble one of the most capable governing cabinets any state or this nation has ever seen. I trust enough in these principles to allow them to, once more, guide me to construct another exemplary team that can do Nigeria proud.

“Second, this chapter in our country’s history demands a bold yet pragmatic approach, a path already chartered by the progressive ethos of the APC. The foundation for sustainable progress has been laid these past seven years by the administration of President Muhammadu Buhari. The challenges of today are consequential because the lives and livelihoods of millions of Nigerians lie in the balance. Visionary and creative leadership will take us to our goal.

“Our focus, therefore, must be on getting the job done; and that means getting the very best and competent people to do it. In this crucial moment, where so much is at stake, we must prioritize leadership, competence, and the ability to work as a team over other considerations.

PREVIOUS POST Tinubu picks former Borno gov, Shettima as running mate
NEXT POST Senate to issue warrant of arrest on officials of PAP over failure to appear for alleged mismanagement of over N10bn