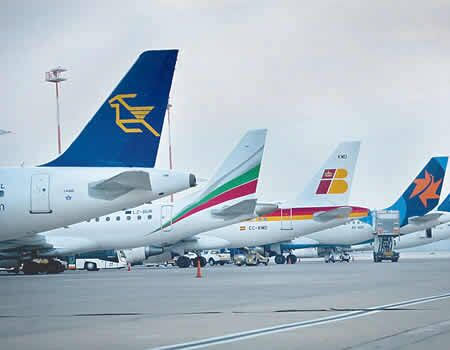 The Airline Operators of Nigeria has threatened to sue the Federal Government over continued multiple entries granted to foreign airlines.

The body also declared that for any foreign airline or investors to invest in the new national carrier, it must deposit at least $200 billion with the Central Bank of Nigeria (CBN) to be sure of their seriousness, saying that no airline should use Nigeria as a dumping ground for unused aircraft.

This comes on the heels of the Federal Government insisting that the multiple entries to airlines is good economics to the foreign airlines, but the AON believes that this puts pressure on the foreign exchange for Nigeria.

Speaking at the Q1 2022 Breakfast Business Meeting organised by the Aviation Round Table (ART) with the theme: ‘Economic Implications of Multiple Entry Points by Foreign Airlines Into Nigeria,” Alhaji Yunusa Abdulmunaf, President of AON, said that the body has decided to challenge the government in the court of law of the current policy on multiple entries to airlines is not addressed.

Abdulmunaf who was represented at the occasion by Mr. Allen Onyema, the Vice President of AON, said that the body would in the next few days meet with Sen. Hadi Sirika, the Minister of Aviation to deliberate on the issue.

He insisted that the multiple designations is one of the greatest disservice to the Nigerian economy and its people.

Also, Dr. Gabriel Olowo, the President of ART, decried that foreign airlines are gradually taking over the domestic market with continuous approvals for multiple entries for foreign airlines.

The Federal Government has defended the multiple entry points it granted to foreign airlines, saying it will generate revenue for the country.

The Minister of Aviation, Sen. Hadi Sirika, made this known on Thursday during the 1st Quarter Aviation Safety Round Table Initiative (ASRTI) Business Breakfast Meeting in Lagos.

According to him, the granting of multiple entries points to foreign airlines into the country has been an issue of contention in the industry.

The minister noted that granting of multiple designations also opens up prospects to domestic airlines, adding that it also improves their market by distributing passengers for connection.

“Multiple entry points are granted to foreign airlines based on the nature of their Bilateral Aviation Safety Agreements (BASAs).

“This will expands the business and grow the economy of foreign airlines. The idea was to generate revenue for the country.

Sirika reeled out some obvious disadvantages of the move but still said there were things to gain.

The minister, however, noted that granting of entry into more than two airports could expose foreign airlines to domestic routes.

He said it would therefore affect the domestic markets of the domestic airlines and this had its negative implications.

According to him, multiple entries is also against the Carbotage Act, which does not allow the airlines to generate much-needed revenue that will help in their growth.

The minister said domestic airlines stand to gain from opportunities created by International airlines distributing passengers for connection with these airlines.

Nevertheless, there are prospects for domestic airlines as they have opportunities for improved domestic markets by distributing International passengers for connection with these airlines.

“The grant of entry points to foreign airlines should also be such that they are given multiple entries, to either Lagos or Abuja and not Lagos and Abuja.

“This is in addition to any other airports outside the geographical area of the first choice of Lagos and Abuja, e.g Port Harcourt, Kano and Enugu.

“In this way, they do not take over all the businesses on all the International Airports,” he said.

PREVIOUS POST ‘Maybe We Are Considered Jokers:’ Reps Blast Service Chiefs, Others For Not Honouring Invitation
NEXT POST US Celebrate Groundbreaking Of $537m Consulate Building In Eko Atlantic