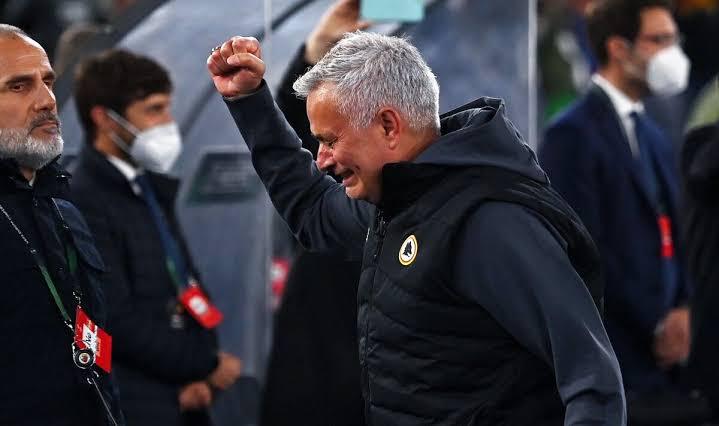 Jose Mourinho burst into tears at full-time after leading Roma to their first European Final in 31 years.

Tammy Abraham’s 11th-minute goal was enough to send I Giallorossi into the finals, where they will now face Feyenoord.

It was a historic night for Mourinho, who became the first coach to take four different teams to a European final after his previous exploits with Porto, Inter Milan and Manchester United. And the 59-year-old now has a chance to go one further and end Roma’s 14-year trophy drought later this month.

The tie was well poised at 1-1 from the first leg played at the King Power a week ago, leaving everything to play for at the Stadio Olimpico.

“Why did I shed a tear? Because I feel what they all feel,” he said at the end of the match. “It’s a giant club without a trophy room for the social importance of this club.

“I know what it means to these people and my emotion was for them. I’ve been lucky enough to be in more prestigious finals but this made me feel very special'”

“We have a sense of family. With age you become less selfish and more of a father or even a grandfather to some of them, I’m very happy for all of them. Rome is a red and yellow city, we’ll see the joy over the coming days. I’ve made a small contribution to that,”

Speaking after the final whistle, Leicester boss Brendan Rodgers acknowledged their inability to defend setpieces, adding that it’s been their Achilles heel all season.

But after a rocky start, Mourinho has started to show why he is one of Europe’s most successful coaches. And after shutting out the Foxes with a vintage Mourinho performance, the Roma boss was quick to talk up his team’s displays over the two legs – even if others might see things “differently”.

He added: “I think our performance was extraordinary. Others might see it differently, but when your goalkeeper makes two saves over 120 minutes against a Premier League side with so much attacking quality, it means we’ve done something good.”