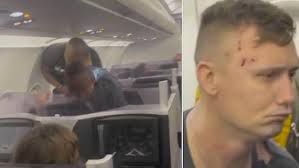 Mike Tyson has made heads turn for all the wrong reasons. The 55-year-old boxing legend reportedly punched a fellow passenger on a flight from San Francisco to Florida on Wednesday evening (April 20). Such was the impact of Tyson’s anger on the fellow passenger that he was left badly bruised with a bloody forehead.

Cell phone footage, obtained by TMZ, displays the former heavyweight champion smacking an allegedly over-eager fan in the seat directly behind Tyson. A witness revealed that a man and his friend greeted Tyson while boarding the flight and interacted with him. Soon, the veteran boxer got tired of engaging with his fans and asked them to keep quiet. Not paying much attention to his request, the man continued to speak which irked Tyson and he lost his cool eventually.

In the video, it can be seen that Tyson lost his composure, got up from his seat and turned behind to smack the fellow passenger leaving him badly bruised.“Hey, hey, hey, hey, hey Mike, come on, stop that,” a man is heard saying on the cell phone footage.

Another video from the flight also showed the aftermath of the incident, with the man sporting traces of blood on his forehead after being hit by Tyson.

‘My boy just got beat up by Mike Tyson,’ said the man recording the clip. ‘Yeah, he got f***ed up. Just trying to ask for an autograph. I don’t know what happened.’ As per reports, the man reportedly told the police but it remains unclear if the legendary boxer will be investigated or not.