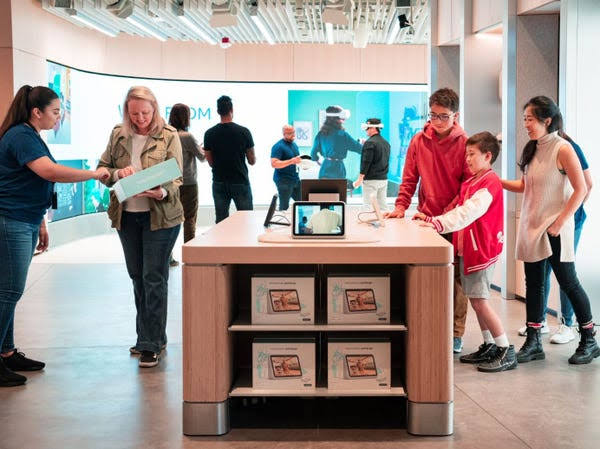 Meta is launching its first hardware retail store on its campus in Burlingame, California. The store, which opens May 9th, will let visitors try out and buy Meta’s Portal videophones and Quest virtual reality headsets. They’ll also be able to demo the Ray-Ban Stories smart glasses that debuted last year and get help ordering them online.

Meta’s store will include a demo area for Portal where users can test its video calling features with a store employee. There’s a space to test several Quest 2 demos, including Beat Saber, GOLF+, Real VR Fishing, and Supernatural, and visitors will take home a 30-second mixed reality clip showing them playing a game. They can also try on different styles of the Ray-Ban glasses, which capture and share video with built-in cameras, and test their capabilities before buying. Meta is also adding a “Shop” tab to its website, making it easier to find all its products in one place online.

The move is a significant foray into hardware sales for Meta, following the footsteps of companies like Google, which opened its first retail establishment last year after several more limited pop-up stores. Meta has previously partnered with Best Buy on demo stations for its VR headsets, and Ray-Ban Stories have appeared in the sunglasses company’s own stores. The new store opens another opportunity to sell people on still-unusual virtual and augmented reality (sometimes characterized as “metaverse”) tech, a major area of focus for the company.

It’s also, however, a pretty limited one. The small 1,550-square-foot storefront is opening near Meta’s Reality Labs headquarters (at 322 Airport Boulevard in Burlingame) rather than a major metropolitan area like Google’s store in Manhattan. It will be open from 11:00AM to 6:00PM Monday through Friday, which isn’t exactly prime shopping hours. Meta store head Martin Gilliard says in a statement that the Burlingame location “gives us more opportunity to experiment and keep the customer experience core to our development,” lessons from which will “help define our future retail strategy.”

Meta’s last big product release was last year, but the retail store seems likely to provide a staging ground for showing off future VR / AR projects as they develop, including more advanced mixed reality glasses and control systems. It also gives Meta an up-close look at how people will respond to this hardware — much of which raises significant privacy concerns — in a real-world setting.