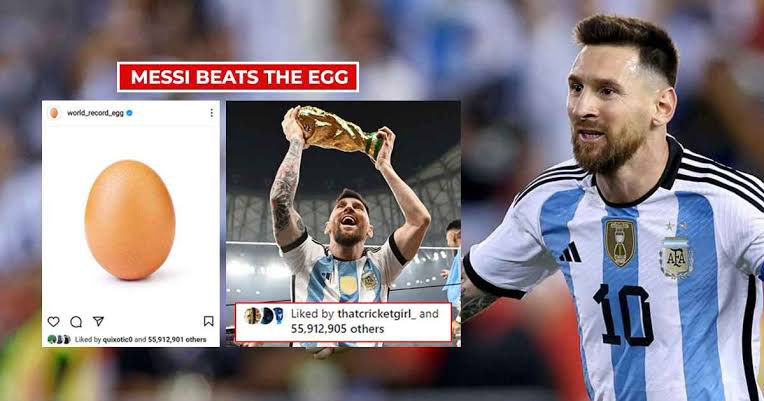 Lionel Messi finally won a FIFA World Cup with Argentina, sparking celebrations all around the world. Messi scored two goals in the final against France in a thriller that ended 3-3 in extra time, before Argentina prevailed 4-2 on penalties.

The jubilation around the world following Messi’s feat was evident as the Argentine’s post on Instagram following the historic win became the most-liked post ever in less than two days of him uploading it. His post surpassed the previously held record of 56.2 million likes held by Chris Godfrey’s photo of an egg.

Messi’s social media update first crossed Cristiano Ronaldo’s photo of Messi and him playing chess, advertising for Louis Vuitton. Ronaldo’s post held the earlier record for most likes on a post by a celebrity, with 42 million likes as of December 20 evening, by which time Messi’s had reached 58 million.

In his post, Messi shared pics from the wild celebrations after the final. He captioned it: “World Champions! I dreamed it so many times, I wanted it so much that I still haven’t fallen, I can’t believe it…… Thank you very much to my family, to all who support me and also to all who believed in us. We demonstrate once again that Argentines when we fight together and united we are capable of achieving what we set out to do. The merit belongs to this group, which is above individualities, it is the strength of all fighting for the same dream that was also the dream of all Argentines… We did it!!!

Argentina defeated defending champion France on penalty kicks, winning their first World Cup since 1986 and third overall. It also marked a crowning achievement in the career of Lionel Messi.

Messi twice gave Argentina the lead, at 1-0 on a 23rd-minute penalty and 3-2 in the 108th minute. At 35, he became the first man in World Cup history to score goals in the group stage, Round of 16, quarterfinals, semifinals and final.

(With inputs from Reuters)