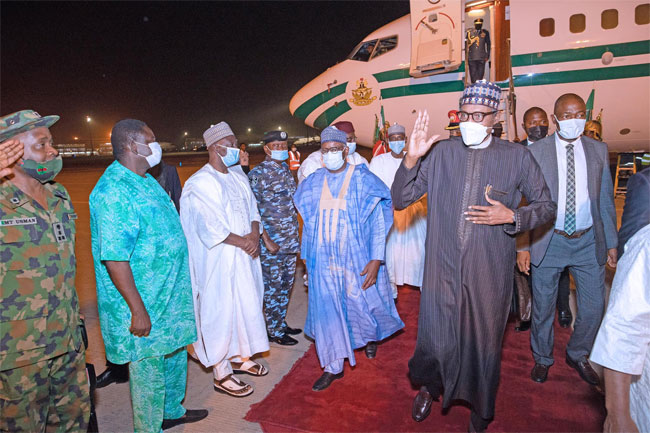 Previously, the president had wanted to embark on the medical journey from Nairobi, Kenya, after attending the United Nations Environment Program (UNEP) at the age of 50 in that country, on March 5, but returned to Nigeria on March 4.

The president’s spokesman, Mr. Femi Adesina, had said in a statement on March 1 that from Kenya, the president would head to London for “routine medical checks lasting a maximum of two weeks.”

However, the president returned to Abuja on Friday at around 1pm before leaving for London on March 6.

While in London, the president was believed to have met with the acting national chairman of the All Progressives Congress Extraordinary Conventions Committee (CECC), Mai Mala Buni.

The president, at the end of the London meeting with Buni, called on the governors of the All Progressives Congress (APC) to stop further statements leading to disunity before the National Convention.

A statement spokesman, Mr. Femi Adesina, said Wednesday in Abuja that the president made the call through a letter he personally signed and addressed to Governor Atiku Bagudu of Kebbi state.Bagudu is also the chairman of the Progressive Governors Forum.

The residential plane carrying the president landed at the Presidential Wing of the Nnamdi Azikiwe International Airport, Abuja, at around 7:09 p.m.

PREVIOUS POST Charles Soludo becomes first Nigerian state governor to use Innoson vehicles as official automobile
NEXT POST Grey hair not only for aged, but as genetic deficiencies