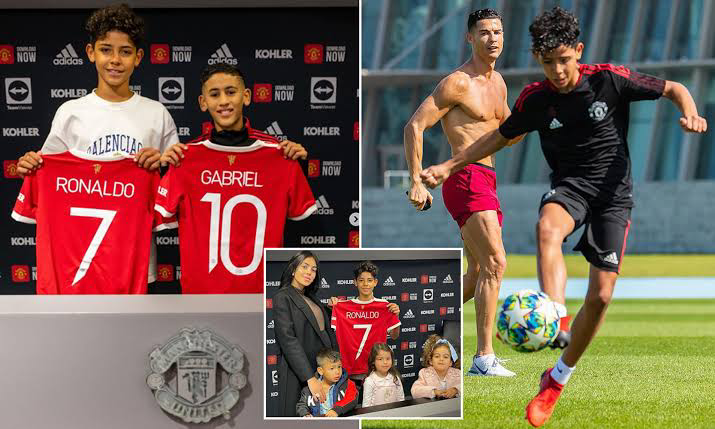 Manchester United appear to have officially unveiled Cristiano Ronaldo Jr, who has joined his dad as a Red Devils player.

Ronaldo Jr, who has just opted for Ronaldo on the back of his shirt, was snapped alongside a teammate after signing a contract

Unsurprisingly, the youngster has followed in his fathers’ footsteps by selecting the famous No.7 shirt.

Ronaldo Jr has been in the United ranks since his father’s return to Old Trafford over the summer, and like his dad, the youngster swapped Juventus for the Red Devils.

The youngster will join United’s U12 side – which also has Nemanja Matic’s son.

He made his debut just after his ninth birthday, scoring four goals before netting seven in the first half against CS Maritimo later in the season.

Cristiano Ronaldo told DAZN shortly after joining the Old Lady: “I hope that Cris, my son, can be like his dad.

He says he is going to be better [than me], but I think it’s difficult.

“He is playing for Juventus and adapting really well, it has been easier for him than for me

Ronaldo was unveiled alongside another youngster, who goes by JJR10 on Instagram.

The post was captioned: “Delighted to finally have my signing day done even better to have mine with teammates @cristiano JR.”