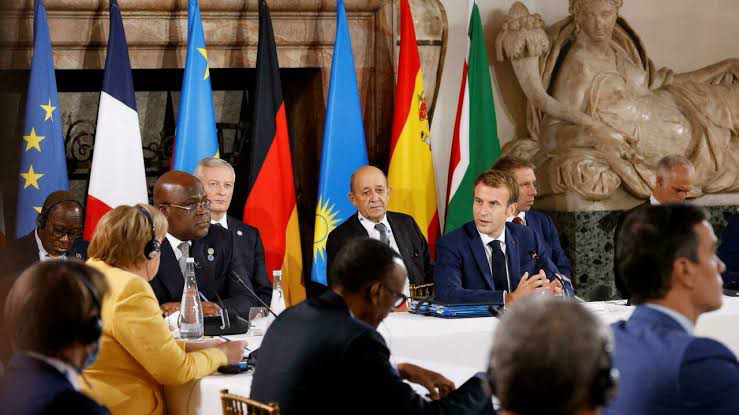 France plans to host a summit devoted to the fight against Islamic extremists in West Africa as it considers withdrawing its troops from Mali while maintaining military operations in the broader Sahel region, the French presidency said Wednesday.

Tensions have grown between Mali, its African neighbors and the European Union, especially after Mali’s government allowed Russian mercenaries to deploy in its territory.

French President Emmanuel Macron will meet with African and European counterparts during a dinner at the Elysee presidential palace in Paris on Wednesday. The discussion will address France’s potential withdrawal from Mali, the involvement of a U.N. peacekeeping force and the status of an EU training mission.

An EU-Africa summit is scheduled for Thursday and Friday in Brussels.

The EU this month imposed sanctions on five senior members of Mali’s transitional government, including Prime Minister Choguel Maiga, accusing them of working to obstruct and undermine the country’s transition from military to civilian rule.

The heads of states of Chad, Niger and Mauritania are expected to attend the Paris talks. The Mali and Burkina Faso coup leaders have not been invited since both nations are suspended from the African Union, the French presidency said.

“We are now in a situation which requires drawing the consequences of the political split and operational split” with Mali, French Foreign Minister Jean-Yves Le Drian told French lawmakers on Tuesday.

Decisions need to be discussed collectively in order to “find another way forward,” he said.

A French presidency official said France wants to pull out from Mali because of the “important risk of interference” from the Russian mercenaries, a situation he called “unacceptable.”

France and 15 European countries in December condemned the Malian transitional authorities’ decision to allow the deployment of personnel from Russia’s Wagner Group, which has started operating in the country and is accused of rights abuses in the Central African Republic, Libya and Syria.

Mali has struggled to contain an extremist insurgency since 2012. Rebels were forced from power in northern cities the next year with the help of a French-led military operation. But the insurgents regrouped in the desert and began attacking the Malian army and its allies.

France has about 4,300 troops in the Sahel region, including 2,400 in Mali, a former French colony. The so-called Barkhane force is also involved in Chad, Niger, Burkina Faso and Mauritania.

Paris led intense consultations with its regional and European partners in recent weeks, with the aim of showing a united front and avoid the appearance of France making unilateral decisions about Mali.

“Today, our partners tend to consider that the conditions for a success of our mission in Mali are not met anymore, but we don’t want to bring a response before making sure a consensus is clearly established,” a French official said.

The official, speaking on condition of anonymity due to the sensitive nature of the talks, suggested that troops from the European-led military task force known as Takuba, may also withdraw.

At the same time, “other countries in the region want more support” and expressed their will to keep a “European presence,” the official stressed.

“The goal is not to move away our (military) structure in Mali, to put it in another country, but to be able to adapt to the needs of other countries,” the official said.

Less than two months before France’s presidential election, Paris also wants to avoid a disorganized pullout that could be perceived as a defeat. Macron is expected to run for reelection in the April contest.

At least 53 French soldiers have died in the Sahel since 2013. Insecurity in the region has worsened in recent years with attacks on civilians and United Nations peacekeepers. The EU has been training the Malian armed forces since 2013.

Mali’s transitional government asked Denmark last month to pull out its small military force just one week after it arrived as part of the EU force.

“The situation in the Sahel is a serious crisis on the threshold of Europe,” Danish Prime Minister Mette Frederiksen, who planned to attend Wednesday’s talks in Paris, said.

Frederiksen stressed the importance of supporting the region’s development.

“Fragility increases the risk of migratory flows toward Europe. There are terrorist groups like al-Qaeda and Islamic State in the area that must and must be fought,” she said.