LUXURY BRANDS HALT SALES IN RUSSIA: GUCCI, LOUIS VUITTON, CHANEL, AND CARTIER HAVE CEASED OPERATIONS IN THE COUNTRY AMID THE UKRAINIAN CONFLICT 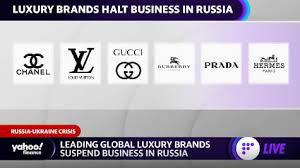 A number of major luxury brands announced late on Friday that they would be closing their stores and halting their operations in Russia. They cited logistical difficulties and concern for staff safety amid the invasion of Ukraine.

The Kering Group said it would be temporarily shuttering its boutiques, including those of Gucci, Yves Saint Laurent, and Balenciaga, “due to growing concerns regarding the current situation in Europe.”

LVMH, the world’s biggest luxury company by sales, with a stable of more than 75 brands, including Christian Dior, Louis Vuitton and Moёt, released a statement to the fashion news outlet WWD. It said its stores would be temporarily closed in Russia from Sunday.