Lose your train of thought mid-voice note? WhatsApp now lets you PAUSE and resume your recordings 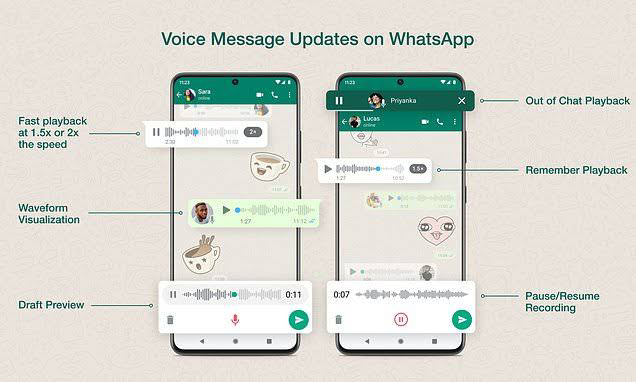 WhatsApp now allows users to pause and resume recordings halfway through creating a voice note, according to the Meta-owned company.

“We’ve just added some new features, including Play outside the chat, Pause recording, and Draft preview to make it easier to send and listen to your messages. I hope you enjoy it,” Zuckerberg announced.

The company confirmed six new features related to voice messaging, including listening outside of a chat, a visual representation of the sound, and a preview before posting.

Voice messaging in WhatsApp was first launched in 2013, with the aim of providing people with a quick way to communicate without having to type.

It proved immediately popular, and the latest usage figures suggest there’s no sign of that changing. Messages are also encrypted end-to-end.

“By keeping the design simple, we’ve made recording and sending a voice message as quick and easy as writing an SMS,” said a WhatsApp spokesperson.

“Voice messages make it easier for people to have more expressive conversations. Showing emotion or excitement through voice is more natural than text.’

Zuckerberg unveiled a number of new features, intended to make conversation via voice messages easier for the sender and the listener.

Some of these are features users have been asking for, including the ability to pause recordings halfway through, instead of starting from scratch if you make a mistake.

On the other hand, if you stop listening to a voice message, it currently goes back to the beginning, but now it remembers your last position – so you can record it again.

These are all ‘value added’ features that enhance the function of voice messages, including the ability to pop the player out, listen while you are out of the chat window, allowing users to perform other tasks such as reading other messages.

Being able to pause and resume recording while you’re recording a voice message is one of the most requested, which WhatsApp says will come in handy when “you’re being interrupted or need to organize your thoughts.”

In a feature that should have been there from the start, users can also listen to the messages before they are sent – ​​similar to iMessage.

WhatsApp not only makes recording easier, but has also improved the appearance of the voice message player by adding a visual component.

This is in the form of a waveform, which moves to the sound of the voice message.

Finally, users can speed up the playback of a message that has been forwarded to them by other people – at 1.5x or twice the speed at which it was recorded.

“In many situations, voice messages are the preferred form of communication on WhatsApp,” explains a spokesperson.

It’s easy for everyone to use – for your family members who prefer to avoid typing, for your friends who like to tell stories, for your peers who need words of encouragement, or for when you want to hear your partner’s voice at the end of a session. long day.’

Play outside chat: Listen to a voice message outside of chat so you can multitask or read and reply to other messages.

Pause/Resume recording: When recording a voice message, you can now pause the recording and resume it when you’re done, in case you’re interrupted or need to organize your thoughts.

Waveform Visualization: Displays a visual representation of the sound in the voice message to help track the recording.

Concept example: Listen to your voice messages before sending them.

Remember play: If you pause while listening to a voice message, you can pick up where you left off when you return to chat.

PREVIOUS POST Forget flying cars! Manager of Japanese baseball team enters stadium on a flying MOTORBIKE that costs a sky-high £500,000 and can travel at speeds of 60mph for up to 40 minutes
NEXT POST Mikel Arteta gets validation from critics after matching Arsene Wenger Arsenal achievement