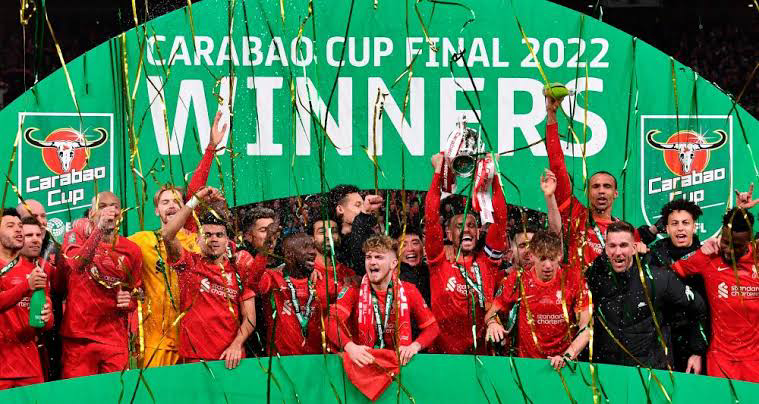 Liverpool won the League Cup final in dramatic fashion as Chelsea goalkeeper Kepa Arrizabalaga missed the decisive penalty to give the Reds an 11-10 shoot-out victory after a pulsating 0-0 draw at Wembley on Sunday.

Jurgen Klopp’s side clinched their first domestic knockout prize since the 2012 League Cup when Kepa blazed his spot-kick high over the bar.

It was the only miss in the nerve-jangling shoot-out, which saw Liverpool keeper Caoimhin Kelleher score his penalty just before Kepa failed.

Ironically, Kepa was sent on at the end of extra-time to replace Edouard Mendy given his reputation as a penalty saving specialist, but the Spaniard was unable to repel any of Liverpool’s kicks.

Kepa had already endured penalty misery in the 2019 League Cup final when he petulantly refused to be substituted before a shoot-out defeat against Manchester City.

Liverpool saw Joel Matip’s second-half goal controversially disallowed for a marginal offside against Virgil van Dijk, while Chelsea had three goals ruled out for offside later in the match.

The Reds have lifted the League Cup a record nine times, while Klopp is the first German manager to win the tournament after finally tasting Wembley success following two previous defeats as a boss there.

“There should be space for some sentiment. Caoimhin Kelleher is a young boy, plays in all the competition. I cannot tell him he can’t play the final,” Klopp said.

“I’m happy for the people in dark times to celebrate something like this. Chelsea are incredibly strong, we matched each other. We needed to have luck.”

Liverpool remain in contention for an unprecedented quadruple after closing the gap on Premier League leaders Manchester City to six points with a game in hand.

They are on course for the Champions League quarter-finals after a last 16 first-leg win at Inter Milan and host Norwich in the FA Cup fifth round on Wednesday.

While the match was memorable, there was a sombre beginning as both teams united in a show of support for war-torn Ukraine before kick-off.

Amid the Russian invasion of its neighbour, Chelsea skipper Cesar Azpilicueta and Liverpool captain Jordan Henderson carried flowers in the country’s yellow and blue colours onto the pitch.

For Chelsea, this was a painful end to a difficult week, which saw Russian owner Roman Abramovich on Saturday announce that he is “giving trustees of Chelsea’s charitable foundation the stewardship and care” of the club.

Abramovich, who will remain the owner, made the move after calls in the UK Parliament for Russian oligarchs to be stripped of their assets.

Chelsea boss Thomas Tuchel refused to blame Kepa, saying: “It’s harsh. There is no blame of course. Everybody knows how good Kepa is. Unfortunately he could not save one. The penalties were brilliantly taken.

“You take these decisions and sometimes they don’t work out. Our level made me very proud. We played a huge part in a brilliant match. We should not lose sleep over it.”

Chelsea paid for a series of missed chances, with Christian Pulisic wastefully guiding his close-range effort straight at Kelleher in the opening minutes.

Mendy sprawled to his right to repel Naby Keita’s 20-yard drive, then scrambled across to push Sadio Mane’s close-range follow-up over the bar with one hand when it seemed certain he would score.

Chelsea should have been ahead before the interval when Mason Mount somehow volleyed wide from eight yards with the goal at his mercy.

Mount managed an even worse miss early in the second half, scuffing his shot against the post after being left completely unmarked inside the area.

In the 67th minute, Matip nodded Mane’s header into the roof of the net from close range before Van Dijk was adjudged offside.

Havertz saw his header disallowed for a much clearer offside than the one that denied Klopp’s side.

Romelu Lukaku, introduced after being left on the bench for a second successive game, thought he had put Chelsea ahead in extra-time, but a debatable offside decision disallowed his clinical finish.

Havertz was denied a goal by another offside flag, setting the stage for Liverpool to win it in the shoot-out.