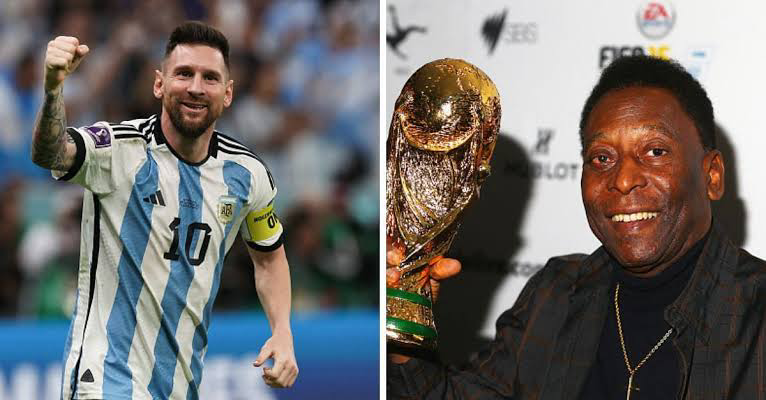 Argentina forward Lionel Messi has broken another record after his exceptional display in the 2022 FIFA World Cup quarterfinal clash against the Netherlands on Friday. The Paris Saint-Germain star led his team from the front as Argentina secured a semifinal berth with a 4-3 win on penalties after the regulation time ended in a 2-2 draw.

The Argentine skipper assisted in the opening goal for Nahuel Molina to become the player with the highest number of assists in the knockout stages of the World Cups, surpassing Brazil’s great Pele.

Messi overtook Pele’s four assists in the knockout stages, a record that has remained intact since 1966. Messi’s assist on Friday was his fifth in the competition’s knockout stages. This was also his seventh overall assist in the five World Cup campaigns he has had with the South American nation

Messi cut open the tight Dutch defensive line with a pin-point through ball behind Molina, who gave it a classy finish to put the Argentines ahead in the 35th minute of the game at the Lusail Stadium. The 35-year-old also converted a penalty in the second half of the game to put his team 2-0 up. However, the Dutch made a near-impossible comeback through two late goals by Wout Weghorst to take the game into extra time.

The game then went onto penalties, where Lionel Messi’s side kept the nerves of steel to progress to the next round as Dutch skipper Virgil Van Dijk and Steven Berghuis missed their opportunities from the spot. For Argentina, only Enzo Fernandez missed his attempt as four other players, including skipper Lionel Messi, Lautaro Martinez, Leandro Paredes, and Gonzalo Montiel, converted their penalties.