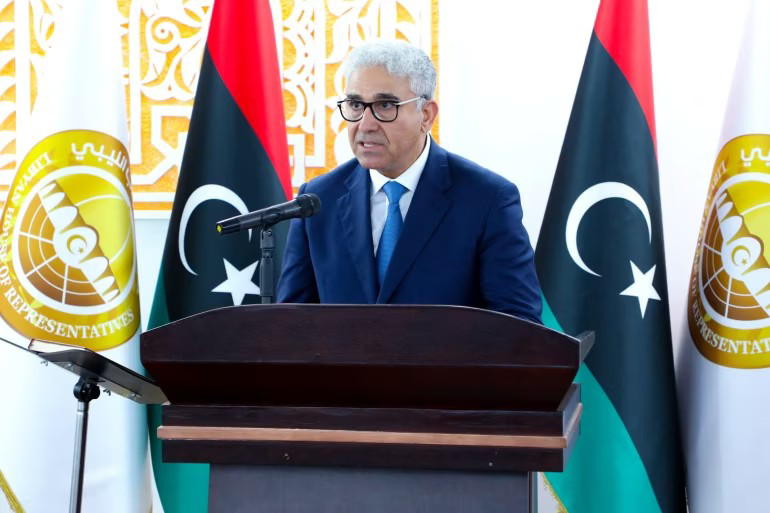 A standoff between two rival governments in Libya risks resulting in the territorial division as the parliament in the east swore in a new administration while the incumbent in Tripoli refused to cede power.

The cabinet appointed by the prime minister of the new rival government, Fathi Bashagha, was sworn in later on Thursday, though not all ministers attended.

After taking the oath, Bashagha told the Tobruk-based parliament that armed groups had abducted the newly appointed ministers for foreign affairs, culture and technical education and shot at others who were on their way to the swearing-in ceremony. The reports could not be independently verified.

“Some are trying to drag us into war and infighting but we will not give them such a chance. We will not spill a single drop of blood,” Bashagha said. “We will study all options so that we can take over power in Tripoli by force of the law and not by force.”

Bashagha had submitted his cabinet list to the House of Representatives based in eastern Libya on Tuesday and 92 out of 101 legislators in attendance backed it.

Gamal Salem Shaaban, who had been appointed economy and trade minister, announced his resignation in a video posted on social media.

“That session lacked transparency and integrity and did not meet procedural standards,” Shaaban said. “There is no honour in being part of a cabinet that will bring about war and destruction.”

The United Nations also issued a statement voicing concerns that the voting on the new cabinet was flawed.

Libya’s embattled Prime Minister Abdul Hamid Dbeibah, who, like Bashagha, hails from Misrata, has remained defiant against replacing his government.

The east-based parliament condemned the alleged abductions and held Dbeibah’s government responsible for the safety of all new ministers.

The legislators also renewed their calls for Dbeibah to cede power peacefully.

The appointment of the rival body to the country’s Tripoli-based authorities has raised fears of more strife after nearly 10 years of civil war that saw the country split between parallel administrations in the east and the west.

Libya has been mired in chaos since a NATO-backed uprising removed longtime leader Muammar Gaddafi in 2011. The country was subsequently split between rival administrations based in Tripoli in the west and a Tobruk-based parliament in the east.

Presidential elections scheduled for December 24 last year that intended to replace the transitional government headed by Dbeibah were postponed indefinitely following disagreements over eligible candidates and the ground rules for holding the vote.

On February 10, the parliament appointed Bashagha to form a new government. It said elections should be held within 14 months. Dbeibah refused to step aside, pledging to hold on to power until elections take place.